Moon may have huge water reservoirs trapped under surface: study

The Moon may have huge reservoirs of water trapped under the surface in the form of volcanic ‘glass beads’, which could be extracted and used by astronauts in future lunar colonies, scientists have found. A new study of satellite data found that numerous volcanic deposits distributed across the surface of the Moon contain unusually high amounts of trapped water.
In 2008, researchers detected trace amounts of water in some of the volcanic glass beads brought back to Earth from the Apollo 15 and 17 missions to the Moon. In 2011, further study of tiny crystalline formations within those beads revealed that they actually contain similar amounts of water as some basalts on Earth, suggesting that the Moon’s mantle contains as much water as Earth’s.”The key question is whether those Apollo samples represent the bulk conditions of the lunar interior or instead represent unusual or perhaps anomalous water-rich regions within an otherwise ‘dry’ mantle,” said Ralph Milliken, an associate professor at Brown University in the US.

“By looking at the orbital data, we can examine the large pyroclastic deposits on the Moon that were never sampled by the Apollo or Luna missions,” said Milliken.”

The fact that nearly all of them exhibit signatures of water suggests that the Apollo samples are not anomalous, so it may be that the bulk interior of the Moon is wet,” he said.Scientists used orbital spectrometers to measure the light that bounces off a planetary surface. By looking at which wavelengths of light are absorbed or reflected by the surface, scientists can get an idea of which minerals and other compounds are present. Researchers looked at data from the Moon Mineralogy Mapper, an imaging spectrometer that flew aboard India’s Chandrayaan-1 lunar orbiter.

They found evidence of water in nearly all of the large pyroclastic deposits that had been previously mapped across the Moon’s surface, including deposits near the Apollo 15 and 17 landing sites where water-bearing glass bead samples were collected. Water-rich deposits are spread across the lunar surface, which tells us that the water found in the Apollo samples is not a one-off, Milliken said. The idea that the interior of the Moon is water-rich could have implications for future lunar exploration. “Anything that helps save future lunar explorers from having to bring lots of water from home is a big step forward, and our results suggest a new alternative,” said Shuai Li, a postdoctoral researcher at the University of Hawaii in the US.

In a first, scientists are planning to chase the shadow of the moon using NASA’s research jets during the upcoming total solar eclipse in the U.S., in order to capture the clearest ever images of the Sun’s outer atmosphere.Amir Caspi of the Southwest Research Institute in the U.S. and his team will use two of NASA’s WB-57F research jets to follow the darkness across the U.S. on August 21. Taking observations from twin telescopes mounted on the noses of the planes, Mr. Caspi will capture

The clearest images of the Sun’s corona to date 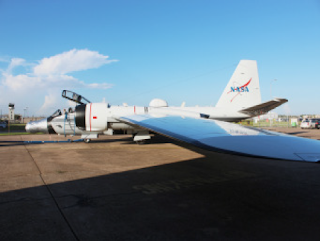 and the first-ever thermal images of Mercury, revealing how temperature varies across the planet’s surface. “These could well turn out to be the best ever observations of high frequency phenomena in the corona,” said Dan Seaton, researcher at the University of Colorado. The total solar eclipse provides a rare opportunity for scientists to study the sun, particularly its atmosphere. As the moon completely covers the sun and perfectly blocks its light during an eclipse, the typically faint corona is easily seen against the dark sky.The vantage point on th planes provides distinct advantages over ground-based observations, researchers said.The corona is heated to millions of degrees, yet the lower atmospheric layers like the photosphere — the visible surface of the sun — are only heated to a few thousand degrees. Scientists are not sure how this inversion happens. One theory proposes micro explosions, termed nanoflares — too small and frequent to detect individually, but with a large collective effect — might release heat into the corona. No one has yet directly seen nanoflares, but the high-resolution and high-speed images to be taken from the WB-57F jets might reveal their effects on the corona.The high-definition pictures, captured 30 times per second, will be analysed for wave motion in the corona to see if waves move towards or away from the surface of the sun, and with what strengths and sizes.The two planes, launching from Ellington Field near NASA’s Johnson Space Center in Houston, will observe the total eclipse for about three and a half minutes each. By flying high in the stratosphere, observations taken with telescopes on board will avoid looking through the majority of Earth’s atmosphere, greatly improving image quality.

At the planes’ cruising altitude of 50,000 feet, the sky is 20 – 30 times darker than as seen from the ground, and there is much less atmospheric turbulence, allowing fine structures and motions in the sun’s corona to be visible.Observations of Mercury will also be taken 30 minutes before and after totality, when the sky is still relatively dark. These images, taken in the infrared, will be the first attempt to map the variation of temperature across the surface of the planet.

The SmartThings Arrival Sensor can be used in a child's bag, a car or around a pet's collar to monitor when they arrive or leave home. It can also emit a beeping noise to help you find your keys.It requires the Smart Things Hub. Rs. 6,770 its availabe in Amazon.in also
32GB SD Card Supportable New Sunglass Spy Camera surveillance systems in a small package. It comes along with a variety of storage capacity that are user-friendly, now safety and smartness on the go. This brooch can be worn too. quality video camera eye-wear with encryption read disk function.Brilliant and rich natural colors, high quality video images.Flexible design suits for different faces for different races and ages.Fashion and cool design keeps up closely with vogue steps.