LETS FIGHT FOR THE EQUALITY

A BRAIN STORMING SESSION FOR THE UPCOMING


GENERATION BY A PROFESSOR, FROM PSYCHOLOGY

It was the first period in a psychology class professor noticed that Zubeda one of best student s was absent for a week. Out of her observation, professor started enquiring about her absence from classmates and finally arrived at the conclusionthat Zubeda was put back at her home because of gender inequality, as her parents thought that women’s higher education is a barrier in building their son’s professional carrier as an engineer. So, it was concluded that due to financial crisis, Zubeda‘s parents opted their son’s studies over their daughter’s study, who is a topper in academics.At this point, in the class among few boys and the girls, a small discussion raised and it turned into a debate.
All of them where expressing their views regarding gender discrimination .Breaking their debate, a voice from middle of the folk banged :that was Salam`s voice stating that “yeah ,the decision of Zubeda’s parents s absolutely genuine and it’s the correct decision``. As the professor asked Salam to justify his statement ;Salam started to explain, As sons, we are the breadwinners of the family and we take the responsibility of parents throughout their life once we settle in life. So it is the right decision that Zubeda has to scarify her studies for the welfare of their family.

As he was still trying to explain, Shabana’s voice stormed from the last benches ,she threw a challenge to Salam by questioning,“ Is it only the sons that do take care of parents, especially at their late age?Are you not aware of daughters who too take part in household chores in spite of
working to financially support their families? Then why do we alone have to face this social injustice“?. The environment of the classroom resembled the court and both the genders were playing the roles of opposing lawyers. Each was trying to justify themselves .Discussion went on for
couple of minutes ;Here the Professors added dear students ,I have a question for you all. “Is any one of you bothered to care your beloved parents throughout their life“? Pausing the long silence, professor continued……..“One is claiming that they are the only bread winner for their parents and another is stating that they too are able to financially support their parents even attending the household chores where the males cannot manage. But is anyone really concerned about them?
I do appreciate the sons for being bread winner for family and the girls for supporting entire family. Now a days, we are witnessing number of working women overcoming their physical burdens at home and they are taking part in financial support of the family. Its good and its encouragable. In spite of this we do have old age homes and even now we can capture number of aged people in front of Masjid, and at traffic signals. Most of them even have their family and kids that are left to play the role of beggars and destitutes literally. This is the gift in turn from their off springs as a gift for giving
birth to them. Another part of this social evil is even being in a good financial position; after getting good jobs and designations, they feel ashamed to keep their parents and flying on in the name of migration career development. It’s like a curse for those who have children with such an attitude and still living in old age home due to meaningless values less so called above excuses.
“It’s not the time to fight for the rights of men or women for equality it’s the time to think with humanity”. 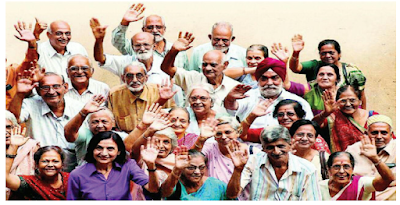 With wet eyes professor‘s voice became coarse while addressing the students: Dear, don’t
fight for the property /shares or advantages of being their son’s or daughters .Fight for the right to
take care of those elderly especially at their ripe age .Crack the walls of each and every old age
home and orphanages .Lets fight for equality in this aspect. When you are fighting for self-benefit
of being their son’s /daughter’s WHY CANT YOU FIGHT FOR UR RESPONSIBILITY OF
YOUR OWN PARENTS

Men or women both have an equal right in responsibility to look after their parents who gave
you birth. That will be the real meaning of gender equality .There is a need for all of us not only a
teacher, during childhood period to guide the youth about the values of the society, but each and
every citizen including politicians too must open their eyes against this social and humanitarian
burning evil so that to make it possible, INDIA FREE OF OLDAGE HOMES ………………….
With hope of positivity. Let‘s celebrate this independence day with humanity and afresh attitude
of equality/…