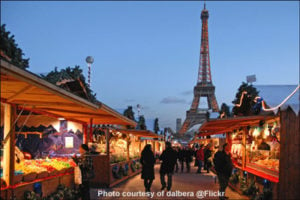 When I first moved to Paris, Francemore than a decade ago, I had high hopes for my first Christmas season. I just knew that this special city, already so magical, would transform itself into something extraordinary.
So, it was pretty shocking when Christmas season rolled around… and it was a complete dud. I had never seen such hideous decorations in my life.
Oh, of course, the Champs-Elysees was beautiful. The phalanx of trees lining the avenue was looped with glittering white-gold lights, making you feel, as you strolled along, as if you were walking one of Hollywood’s red carpets.
At the foot of the avenue at the Place de la Concorde was the Grande Roue, a 30-meter Ferris wheel that offered breathtaking bird’s-eye views of the entire city.
But the rest of the city, for the most part, just….didn’t get it.
I’ll never forget the little pine tree that regularly appeared outside of a shop near Place Dauphine. Each holiday season, the store owner would yoke the poor thing to a water pipe, overload it with huge gold balls and red bows, and then leave it there as if it were an abandoned hostage.
I also fondly remember the lights that the city hung over the main street in our neighborhood each Christmas. I guess they were supposed to create a general festive air, but to me they resembled giant dimly-lit hot water bottles.  Not festive.
Back then, even the massive tree in front of Notre Dame Cathedral was erratically decorated. Sometimes the lights and ornaments would kind of fizzle out toward the top of the tree, as if the city of Paris—home to the Eiffel Tower—simply couldn’t find a ladder tall enough to put decorations that high.
I found the apparent indifference to Christmas in Paris baffling. My husband’s theory was that Paris was already so beautiful and special that it felt no need to enhance its beauty at Christmastime.  I daresay he was right.  But in my head I composed letters to the Mayor, begging him to allow Paris to live up to its potential at Christmas.
I never did write a letter of complaint, but perhaps others did, because slowly things began to change. The “hot water bottle” lights in my neighborhood disappeared and were replaced with wintry-white lights set in a pretty snowflake pattern. The Notre Dame tree started being decked with warm blue lights that went all the way to the top.
And the poor little Christmas tree, gaudily decorated and trussed to a water pipe, finally ceased to make an appearance, never to return.
If I were arriving in Paris for the first time today, I’d probably think the city does Christmas “right.” I would fall in love with the whirling carousels that each arrondissement erects for the season…the free ice-skating rink outside the Hotel de Ville in central Paris…the tasteful, if not quirky, holiday decorations that most districts and shops embrace.
I’d wander the cozy Christmas markets of Trocadero or Saint-Sulpice peering in each wooden, chalet-style stand, sipping from a cup of vin chaud (mulled wine), and be amazed at how Paris has transformed itself for the Christmas season.
at October 05, 2017