In her Christmas message, the Queen praises the ''skill, dedication, training and teamwork'' of the Olympic athletes
The Queen is to pay tribute to the nation's Olympic and Paralympic athletes in her Christmas broadcast.
She will hail the "splendid summer of sport" and highlight how the sportsmen and women allowed spectators to feel part of the "excitement and drama".
For the first time the address will be broadcast in 3D.
On Sunday, the Queen missed church as she was recovering from a cold, Buckingham Palace said. But she is expected to attend on Christmas Day.
A Buckingham Palace spokeswoman said the speech, which will be broadcast in full on Christmas Day, would focus on "service, achievement and the spirit of togetherness".
During the address the Queen will say: "As London hosted a splendid summer of sport, all those who saw the achievement and courage at the Olympic and Paralympic Games were further inspired by the skill, dedication, training and teamwork of our athletes. 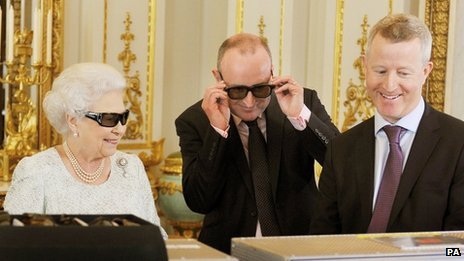 Behind-the-scenes footage shows the Queen viewing the broadcast with 3D glasses.
"In pursuing their own sporting goals, they gave the rest of us the opportunity to share something of the excitement and drama."
The Queen had her own starring role in the London Olympics, declaring them officially open after appearing to parachute into the stadium with James Bond.
It has been an eventful year for the royal family, with the Queen celebrating her Diamond Jubilee in June, marked with UK-wide celebrations.
She also became the first British monarch to reach a 65th wedding anniversary.
But there were health scares, with Prince Philip, 91, forced to miss some key events during the Jubilee celebrations after being taken to hospital with a bladder infection.
'Absolutely lovely'

Earlier this month, her grandson Prince William announced that his wife the Duchess of Cambridge was expecting a baby.
Behind-the-scenes footage of the Christmas message, made on 7 December, has been released, showing the Queen meeting senior staff from Sky News which produced the broadcast this year.
In other footage she wears 3D glasses as she watches part of the broadcast.
The message was recorded in Buckingham Palace's white drawing room with the Queen wearing a fine silk tulle gown by Angela Kelly.
The Christmas address is written by the Queen and usually has a strong religious framework, reflects current issues and draws on her own experiences over the past year.
Her use of 3D technology comes 80 years after George V first broadcast a Christmas speech on the radio and started the 25 December tradition.
A Buckingham Palace spokeswoman said the monarch thought the broadcast was "absolutely lovely".
She added: "We wanted to do something a bit different and special in this Jubilee year, so doing it for the first time in 3D seemed a good thing, technology-wise, to do."
The message will be transmitted on both television and radio at 15:00 GMT on Christmas Day.
It will be available on the Royal Channel on the YouTube website and will also be shown in Commonwealth countries.
The broadcast will also be screened in standard and high definition.
at October 07, 2017