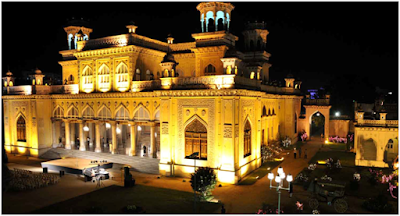 Grandeur of rulers, glory of its past, glimpse of their enigmatic way of living, are still alive in the form of palaces like Chow mahalla Palace, a place worth visiting when on a Hyderabad tour.
Built in the 18th century, almost 200 years ago, the Chow mahalla Palace is one of the popular sightseeing places in Hyderabad. The literal meaning of this place is “Four Palaces” with “Chow” means four in Urdu and “Mahalat” which is the plural of “Mahalel” meaning palaces. Chow mahalla palace is said to resemble Shah Palace of Tehran in Iran.
Chow mahalla Palace History

The construction of Chow mahalla Palace was mainly completed between 1857 to 1869 during the rule of fifth Nizam, Afzar-ud-Daulah, Asaf Jav V. However, its building is mostly credited to Nizam Salabat Jang in 1790. The Palace originally covered 45 acres which extended from the Laad Bazaar on the north to the Aspan Chowk Road on the south. Now, the total remained area of the palace is close to 12 acres.
The palace was restored by the Government and was opened to the public in the year of 2005. One can visit the palace throughout the week except on Friday and national holidays.

Things to do at Chow mahalla Palace 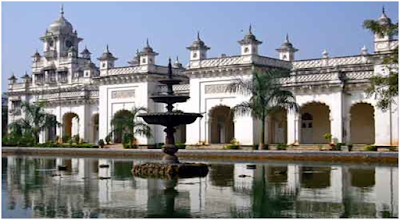 Chow mahalla Palace Architecture
The Chow mahalla Palace is consisted of two courtyards which are divided into the northern courtyard and the southern courtyard. The southern courtyard of the palace has four palaces which are namely Afzal Mahal, Tahniyat Mahal, Mahtab Mahal, and Aftab Mahal. The Aftab Mahal is a two storied building and is the biggest of all the four. The northern courtyard which has been open to public, houses Bara Imam, a long corridor with many rooms on the eastern side, which was once the administrative wing. Another captivating feature of this courtyard is the Shishe-Alat. This was used to receive guests and public figures.
The Chow mahalla Palace has Clock Tower, Council Hall and Roshan Bungalow inside it. The Roshan Bungalow has been named after Roshan Begum who was the mother of sixth Nizam. Khilwat Clock, which is famous for ticking since the construction of the palace, can be seen inside the Clock Tower. At the Council Hall, various manuscripts and rare books which were personal collections of the Nizam have been kept.
The heart of the palace is called as Khilwat Mubarak. This grand Durbar hall is undeniably the best part of the palace. Mughal domes, imposing arches and an intricate Persian work create a masterpiece. Inside the Durbar Hall, there is platform made up of marble. It is on this platform where the royal seat, Takht-e-Nishan was laid.
It is said that Chow mahalla Palace used to have around 7000 attendants on any given day. For its grandeur and charm, it has been often compared to the Enchanted Gardens of the Arabian Nights for its grandeur.
at November 21, 2017