Need for Juxtaposition of Knowledge December, 2017

World and Me need to be juxtaposed to understand the difference between the knowledge of self and knowledge of the world. Part of me is similar to how the world works and another part of me is similar to how the world should ideally work. Knowledge of the reality is required to know the ideal possibility to exist. When the art of heart and art of mind are juxtaposed together we would have a chance to be able to live the truth and propagate the truth too.  I would narrate here a story of a seeker of knowledge to show how juxtaposition is required.
There was an illiterate wanderer who was in search of himself and his creator. He put all his devotion in  knowing his creator. He lived in a forest away from the worldly hosh-posh. He would go deeper inside himself everyday to find the truth hidden inside himself. He would call upon the creator to find the qualities he implanted in the creation. He would call upon the creator to know how he should live and what's wrong in the world he lives in. What's wrong inside himself which the creator never wanted him to acquire. His devotion and meditation was so submissive that a day came when he could hear what others couldn't and he could see what his creator was like through his internal annihilation. He was about to get a manual of life and creation. But a thought kept jumping in his mind," I don't know the way the world works, my knowledge of the world is almost nil. I am trying to know myself, and the language in which I know myself is silence but the world doesn't understand silence. How can I tell the world what I know when I don't know to write, read or speak the world's language?" His questions about himself were answered through silence and he acquired the knowledge of hidden, the knowledge of truth through silence. He didn't know how to share the gift to the world, the gift he has got from the creator.  And he  travelled to know the world which he ran away from. Once been through the knowledge of the world now silence could be translated(not completely but to the nearest possible context) into the language of the world and the manual arrived to the world. The manual where silence was juxtaposed onto the languages of the world.
Man being a social being needs to know the world's norms and methods to be able to reform or transform it. All that silence given to a believer needs to be converted into logic of the world. The art of heart has to be juxtaposed on the art of mind to be able to reach out to whole humanity. When people are isolated, they cannot influence the world for betterment. They need to live among the logicians and take their thoughts across to make them think. They need to live among the emotional and take their feelings across to make them feel. They need to live among dreamers and take their dreams across to create a possibility for a dream. A Dream of Ideal world, a feeling of love for all and the thought of a peaceful world. Therefore, the knowledge of the world, the science, the history, the technology, the engineering, the medicine needs to be juxtaposed on religion, philosophy, spirituality and art. Intuition needs to be juxtaposed on cognition. Dream needs to be juxtaposed on reality.


Those who are not ready to create this balance know only half the truth, are only half-knowledgeable and they cannot love unconditionally, they cannot find a complete peace. So if you want to find a solution to the world's problems and serve the humanity and its creator better make a beautiful blend of both the worlds the inner and the outer so that you need not be aloofer but the social being you were created as. 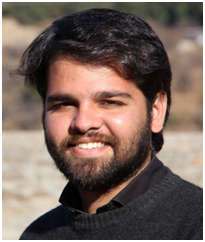 Nuzhath M Syed is an Education and Communication Consultant.
He writes curriculums and teaches holistic methods of education.
He takes simulation workshops using Theatre. He likes to go into
the depth of psychology and spirituality. He is a proponent of
Art Integrated Education. He is an Artist and Sufi by heart and
mind.

Get in touch with him at
nuzhathmsyed@gmail.com