HELP is a Developmental Organization formed by a group of service professionals from different professions committed to protection of women & children from violence, Sexual exploitation, abuse and trafficking.

Founder : Mr.K.N.Murthy & Mr.Ramamohan founders of the HELP Organisation. Mr.Ramamohan - Secretary has good linkages with various NGOs and NGO Networks like AP Alliance for Child Rights, NATSAP (Network Against Child Trafficking & Sexual Exploitation in Andhra Pradesh) and Campaign Against Child Labour - CACL. He has played
Crucial role in the formation of NATSAP and AP Alliance for Child Rights in Andhra Pradesh a forum of NGOs,
Networks, and Activists, promoting the ‘Child Rights and Anti –Trafficking‘ Campaign in the State of Andhra Pradesh.

Mr. Ramamohan is appointed by Govt. of Andhra Pradesh as a Member in State Coordination Committee on
“Prostitution, Child Prostitution and Children of Prostitution”. 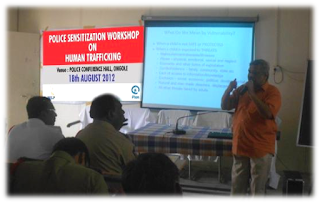 About HELP :  A team of socially motivated individuals consisting of journalists and social scientists etc., came together and decided to promote and strengthen the anti-arrack movement initiated by women in Nellore district in the year 1992. This team very intensively involved in the above task till the prohibition of arrack had been imposed in the state of Andhra Pradesh.  At the meeting of the above team, which was held at Nellore in ’93, it was unanimously decided that the members should form themselves into an association to attend to the welfare and protection of the Rights of the marginalized and vulnerable women and children in the society. Thus, HELP came into existence in the year 1993.  HELP with other like-minded NGOs in ’94, initiated work on the issues of commercial sex workers’ in the Coastal Andhra Pradesh.  It was Registered under societies Registration Act XXI of 1860, No.133/93, Ministry Of Home affair FCRAct. No  : 010330068 and under 12 A and 80-G of IT Act.

Mission :  The mission of HELP is to combat sexual exploitation in all its forms, especially prostitution and trafficking in women and children, in particular girls. HELP prevents trafficking by educating boys and girls in schools and communities in different parts of the state and by training teachers, professionals, police, governmental authorities and the public about the harm of sexual exploitation and ways to resist and combat it.

VISION : The vision of HELP is to create a safe, supportive and responsive society that upholds the protection rights and dignity of every child in Andhra Pradesh. HELP has a long term view of preventing child trafficking, child prostitution and second generation prostitution.

Some of the Achievements by HELP in Preventing Child labor

HELP also working on the issues of child labor in the districts of Prakasam and Guntur Districts. Moreover, Mr.Ramamohan Secretary of HELP is the State Convener for Campaign Against Child Labor (CACL) AP chapter.  Our major achievements in this area….
·         Mainstreamed 750 hard core child labor in to formal education
·         Established two ECCD centers through which provided support to 45 children in prakasam district.
·         HELP played active role in enrolment campaigns and enrolled hundreds of never enrolled children and drop-out children in to schools.
·          Published various effective IEC materials on Child Labour and RTE.
·         Conducted 25 teacher trainings on Corporal punishment, Child rights and RTE.
·         Conducted workshops with teachers and children on alternative disciplinary methods
Networking with NGOs to advocate on the issues of Child Labour.