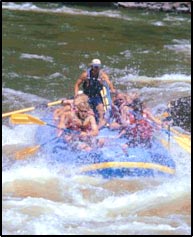 Rishikesh is a scenic town located on the banks of river Ganga and is an important access point to the famous pilgrim spots of the Himalayas such as Badrinath, Kedarnath, Gangotri and Yamunotri. The various spiritual centers, yogic ashrams located here have earned this town the sobriquet “world capital of yoga”. The international tourists also drop in here in large numbers seeking spiritual enlightenment and also to enjoy the natural treasures of this place. The major highlights of this town are Lakshman Jhula, Bharat Mandir, Triveni Ghat, Rishikund, Geeta Bhawan, Swarga Ashram and Trayambakeshwar Temple. Prior knowledge about Rishikesh will be of immense help to the tourists for a satisfying tour to Rishikesh

History of Rishikesh
The history of Rishikesh goes back several centuries. There are several mythical stories associated with this placet is this place where Raibhya Rishi, a noted saint, performed stern penance while sitting on the banks of the holy River Ganga. He got his reward when the lord appeared in front of him and gave the name of this place as Rishikesh. There is also a famous landmark called Bharat Temple and legend states that the brother of Rama, Bharat also did severe penance at this place. One of the most well-known religious leaders of contemporary times, Adi Shankaracharya, visited Rishikesh in the 9th century AD and this place thus got catapulted to the status of one of the major religious spots of north India. Rishikesh is also popular for Kailas Ashram Brahmavidyapeetham that happens to be a 120 years old institute offering courses for the traditional Vedantic Studies.
Best Season, Climate and Clothing


The climate of Rishikesh remains moderate throughout the year, being in the foothills. During the summer months, temperatures can go up to more than thirty degrees centigrade. The winter months are quite pleasant barring some occasions when the nights can get bitterly cold. For the summer, cotton clothing is recommended but do carry heavy woolens during the winter months.

These helpful inputs about Rishikesh are certainly going to make your holidays a satisfying experience.
at February 28, 2018