How a delay in service by govt affects a common citizen ? 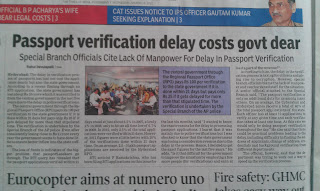 Information prepared with the RTI reply i recieved : 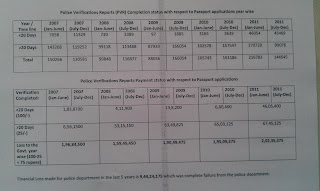 We got independence from British after a long fight by sacrificing many things be it life, time, money, resources.....
After independence to reach the state be call it “INDIA DEVLOPING, INDIA SHINNING, INDIA CHANGING, many of our great leaders have struggled.
But today our cheap leaders are driving us back to dark era. Yes, they are the ones who are driving our nation at present. So now we have two steps,
1) Pull the driver from the seat , which we have chance only once in 5 years if he is elected by wrong choice
2) Change the attitude of the driver by questioning.
Now instead of waiting for the 5 years, I decided to question using the RTI act, like me many citizens have started requesting, ordering, questioning through the RTI the way their funds are spend or need to spent.
On my journey I would like to bring one issue to explain if we don’t question how are they going to affect us directly or indirectly.
Now a day’s Passport has become a need to many citizens deepening on the purpose. The Ministry of External Affairs (MFA) Charge 1000 Rupees from a passport applicant by promising to issue in 30 days of time. But on average the citizens are issued the passport after 3-4 months of time. There are cases where I have seen people who have got passport after 5 years L. Still most of us have not questioned, instead started depending agents to get it done from back doors. For which we are ready to pay another 1000 Rupees. Days have passed it became a habit to all, “ Delay of passport , seek agent help or bribe the office in the office “.
Many citizens have approached ITMD (It’s Time to Make a Difference) seeking help in filling RTI for questioning the passport officials of their passport delay when they know that RTI is a weapon through which we can questions. We assisted in filling the RTI and many of the citizens got benefited with it . For some of the Passport Success stories , please visit the link : http://www.itmd-india.org/index.php/stories/passport-success-stories
Slowly the count of people is increased who are seeking assistance for filling RTI with respect to file RTI. So we decided to find the exact root cause for the delay of passports.
Interestingly we came to know the delay was from the police department. The police dept who has to complete the Police Verification Report (PVR) at the earliest are taking months to finish it. Unless the PVR is provided by police to passport officials the passport will not be dispatched or made ready.
If the PVR is completed with 20 days of time by Police Dept the passport officials pay 100 Rupees for each applicant , and if they are done after 21st day the passport officials pay only 25 Rupees, which is a loss of 75 Rupees. The revenue goes to the AP government.
In the delay we found some shocking observations. The state Govt. instead of earning 100 Rupees by completing in time they decided to take 25 Rupees only. The figures In table provide more information.
Due to this :
1. A.P Govt lost an average of 2 crores revenue every year.
2. The citizens have been harassed/troubled because of the delay .
3. Many employees who have got good jobs could not travel in time and lost chances.
4. Many students have lost chances for their higher studies because of the delay in passport delivery.
5. Many of the citizens had paid extra money unnecessarily to Agents or paid bribes to passport officials.
6. Many citizens have lost time in visiting the passport office for enquiring about their passport.
7. This gave more scope of corruption.
So decide how a normal service affects us as a common man, if we don't question the government in timely manner and the right questions.
So you decide whether you will wait for choosing new leader after 5 years or decided to fight for your rights.
Y.P.Rama Krishna
RTI Activist - More a Common Man first.
ITMD (It's Time to Make a difference)
at March 10, 2018