Mother Teresa was a true follower of humanity. Many people considered Mother as the "reincarnated form of Lord Jesus". Mother Teresa devoted her entire life in serving the needy and abandoned people of the society. Although her mission started in India, she succeeded in bringing the people of all societies under one roof, i.e. humanity. Besides the Nobel Peace Prize, she was also awarded with Ramon Magsaysay and Padmashri Award for her social works.

Life
The original name of Mother Teresa was Agnes Gonxha Bojaxhiu. She was born in Skopje, the capital of Macedonia, on 26 August, 1910. In 1919, when she was eight years old, Agnes lost her father, a noted politician in Albania. At the age of twelve, she felt strongly the "call of God" and wanted to spread the love of Christ. Her religious foundation developed further and in 1928, she left Skopje to join the Institute of the Blessed Virgin Mary, Ireland. The institution was popularly known as Sisters of Loreto. There, she received the name Sister Mary Teresa. After a training of around six months in Dublin, the capital of Ireland, Teresa was sent to India. On 24 May, 1931 she took her initial vows as a nun.

For around next 15 years, Mother Teresa taught at St. Mary's High School in Calcutta, now Kolkata. She also became the principal of the school. On 10 September, 1946, while traveling to Darjeeling, North-Bengal, for the annual retreat Mother realized "the call within call". She felt as if the Jesus was asking her to come out of the walls and serve the down-trodden people. The feeling was so intense that on 17 August, 1947, Mother dressed in white, blue bordered sari left the Convent. In December 1950, Mother for the first time visited the slums of Calcutta. Although she had no funds, she started an open-air school for slum children. Soon she was joined by many voluntary organizations, which provided Mother, a crucial financial support.

Later, on 7 October, 1950, Mother established the Missionaries of Charity in Calcutta. The primary objective of the Missionaries of Charity was to love and care for weak and downtrodden persons in the society. In 1965, the Pope Paul VI granted a Decree of Praise and allowed Mother Teresa to expand her congregation to other countries. Now, the Society became an International Religious Family. Following the decree, the society opened its branches in many countries of the world including some influential erstwhile communist nations. Awards
People from across the globe have appreciated the work and dedication of Mother Teresa. She received numerous awards including the Nobel Peace Prize (1991), Ramon Magsaysay Award and Padmashri Award (1962). The honor and appreciation, Mother Teresa received could not be measured in terms of awards and prizes. The real awards came from the people she served and worked with.

Her Last Days
After 1980, Mother suffered some serious health problems including two cardiac arrests. Despite the problems, Mother herself governed the Missionaries of Charity and its branches, as efficiently as earlier. In April 1996, Mother Teresa fell and broke her collar bone. Since then, Mother's health started declining. On September 5, 1997, Mother Teresa passed away.

Beatification
In 2002, Pope John Paul II confirmed the decrees to Mother's canonization. On 19 October, 2003 the Pope beatified the Mother before a huge crowd at St. Peter's square, Vatican City. 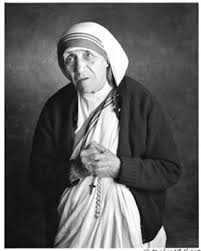