Sarojini Naidu was truly one of the gems of the 20th century India. She was known by the sobriquet "The Nightingale of India". Her contribution was not confined to the fields of politics only but she was also a renowned poet. The play "Maher Muneer", written by Naidu at an early age, fetched a scholarship to study abroad. She briefed the struggles of freedom for independence to the political stalwarts of European nations, she had visited. She married Dr. Muthyala Govindarajulu Naidu, a South India. The marriage took place at a time when inter-caste marriage was not acceptable in the society. Her acts helped in raising many eyebrows. In 1905, a collection of poems, she had composed, was published under the title of "Golden Threshold".

Since childhood, Sarojini was a very bright and intelligent child. Though Aghornath wanted his daughter to become a mathematician or scientist, young Sarojini was fond of poetry. At an early age, she wrote a "thirteen-hundred-lines" long poem "The Lady of the Lake". Impressed with her skills of expressing things with appropriate words, Aghornath Chattopadhyaya encouraged her works. Few months later, Sarojini, with assistance from her father, wrote the play "Maher Muneer" in the Persian language.

Sarojini's father Dr. Aghornath Chattopadhyaya distributed some copies of the play among his friends and relatives. He also sent a copy to the Nizam of Hyderabad. Impressed with the works of the little child, the Nizam granted her a scholarship to study overseas. At the age of 16, she got admission in the King's College of England. There, she had the opportunity to meet prominent English authors like Arthur Simon and Edmond Gausse. It was Gausse who asked Sarojini Naidu to write on the Indian themes like great mountains, rivers, temples, social milieu etc.

After returning to India, at the age of 19, Sarojini Naidu married Muthyala Govindarajulu Naidu. He was a noted doctor from South India. They were married by the Brahmo Marriage Act (1872), in Madras in 1898. The marriage took place at a time when inter-caste marriages were not allowed and tolerated in the Indian society. Her marriage was a very happy one. They had four children.

National Movement
Sarojini Naidu was moved by the partition of Bengal in 1905 and decided to join the Indian freedom struggle. She met regularly with Gopal Krishna Gokhale, who later introduced her to the stalwarts of the Indian freedom movement. She met Mahatma Gandhi, Pandit Jawaharlal Nehru, C. P. Ramaswami Iyer and Muhammad Ali Jinnah. With such an encouraging environment, Sarojini later moved on to become leader of the Indian National Congress Party. She traveled extensively to the United States of America and many European countries as the flag-bearer of the Indian Nationalist struggle.

During 1915, Sarojini Naidu traveled all over India and delivered speeches on welfare of youth, dignity of labor, women's emancipation and nationalism. In 1916, she took up the cause of the indigo workers of Champaran in the western district of Bihar.

In March 1919, the British government passed the Rowlatt Act by which the possession of seditious documents was deemed illegal. Mahatma Gandhi organized the Non-Cooperation Movement to protest and Naidu was the first to join the movement. Besides, Sarojini Naidu also actively campaigned for the Montagu-Chelmsford Reforms, the Khilafat issue, the Sabarmati Pact, the Satyagraha Pledge and the Civil Disobedience Movement.

Poet
Besides her role and sacrifices in the Indian Nationalist Movement, Sarojini Naidu is also commended for her contribution in the field of poetry. Her works were so beautiful that many were transformed into songs. In 1905, her collection of poems was published under the title "Golden Threshold". Later, she also published two other collections called "The Bird of Time", and "The Broken Wings". 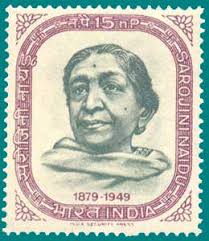