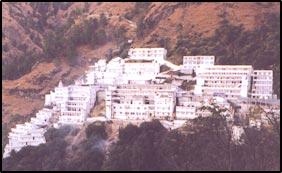 Vaishno Devi is one of the holiest pilgrimage places of north India and is visited by innumerable tourists all the year round. Nestled in the Trikuta Hills at an altitude of 5300 feet, it is a fascinating place truly worthy of a visit. The holy shrine of Mata Vaishno Devi is located in a cave having an approach route of thirteen kilometers. People from all walks of life come here to seek the blessings of the divine goddess and have their wishes fulfilled. The pilgrims reciting the holy refrains fill the atmosphere with religious fervor and encourage the pilgrims to proceed on the tough climb upwards.

History of Vaishno Devi:
There are several legends behind the origin of this goddess and has been described in the “Durga Sapatshati”. The goddess was born as a young girl having unique strength and beauty that was resulted from the ‘Tejas’ (powers) of various ‘Devtas’ and Brahma, Vishnu and Mahesh, the three lords. She took birth in the house of Ratnakar as his daughter and was named Vaishnavi. The remarkable intellectual qualities displayed by her amazed everybody and she had an unending thirst for knowledge that no formal teaching could gratify. She started searching her inner self and concluded that only meditation can lead to the fulfillment of her quest. She gave up the material comforts and went deep into the forest for penance and meditation.
nother legend associated with her creation is the destruction of Asura (Devil) Mahishasura. She was also sent to earth as a messenger of peace and harmony and eventually she merged with Vishnu after sincere meditation and penance. In the present day, the shrine is visited by hordes of tourists all the year round and is also growing in popularity among the foreign tourists.

Best Season, Climate and Clothing:
Vaishno Devi can be visited all the year round, but the pilgrimage is usually undertaken by the devotees in the winter season, i.e., from October to February. Navaratri is the time when thousands of devout pilgrims from all over the country line up the long mountain roads to catch a glimpse of the deity. You must carry sufficient winter cloths in order to safeguard yourself from the chilly nights of the winter.
at March 03, 2018