The cultural capital of India, Varanasi in Uttar Pradesh is a major center for spiritualism, mysticism, Hinduism and Indian philosophy. Also known as Benares and Kashi, Varanasi is one of the oldest surviving cities worldwide and an important pilgrimage destination not only for Hindus, but for Buddhists and Jains as well. Learn more about Varanasi in touristplacesinindia.com before you plan to travel to Varanasi.

Home to numerous Hindu temples, ashrams and ghats, which are among the main attractions for visitors, Varanasi also boasts of several Buddhist Stupas and Jain temples. A melting pot of Indian civilization, Varanasi receives hordes of pilgrims and devotees every year from all corners of the world, who are attracted by the religious places and other tourist attractions of the town. 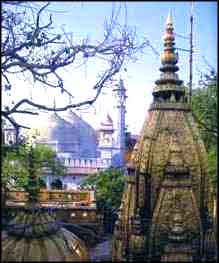 Since time immemorial, Varanasi has continued to be an important cultural and religious centre in northern India. Besides, the city is also famous for the Benares Gharana (school) of Indian classical music developed here. Another prominent feature about Varanasi is that the town houses the distinguished Banaras Hindu University. At various points of time in history, Varanasi served home to many an eminent Indian philosopher, poet, writer, and musician. The local people of Varanasi are famous as advocates of literature, music, Vedic philosophy, arts, crafts and architecture.
Fast Facts


Historical information about Varanasi:
The ultimate pilgrimage spot for Hindus since the days of yore, Varanasi is believed to have been the abode of Lord Shiva and Goddess Parvati, who stood upon this land at the beginning of time. Mark Twain had rightly said "Benares is older than history, older than tradition, older even than legend, and looks twice as old as all of them put together." The city has been a seat of learning and civilization for more than 3000 years. For centuries, the town has witnessed the flourish of knowledge, philosophy, culture, devotion to Gods, Indian arts and crafts. With the holy Buddhist pilgrimage spot of Sarnath being just 10 km away from Varanasi, the latter is also holy place for Buddhists. Believed to be the birthplace of Parsvanath, the 23rd Jain Tirthankar, Varanasi is also a pilgrimage place for Jains.

Accommodation, Climate and Clothing:
There is no dearth of hotels, resorts and guest houses for tourist accommodation in Varanasi. These resorts provide tourists with comfortable and luxurious retreat amid the mystic air of the city. Varanasi enjoys a pleasant winter, but a slightly harsh summer. Monsoon season brings torrential rains to the city. However, the months of October-November and February-March are generally comfortable and sunny. The ideal kind of clothing in Varanasi can be cotton clothes in summers and light woolens for winters.
at March 03, 2018