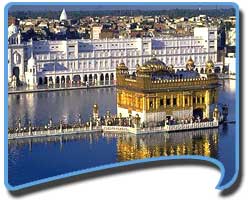 Having derived its name from the Amrit Sarovar that surrounds the famous Golden Temple, the city of Amritsar is located in the northwestern side of India in Punjab. Some of the prominent attractions of this one of the loveliest tourist destinations in India are the several architecturally brilliant Gurudwaras and temples. Your quest to know about Amritsar on your tour to India you will give you a city of distinct character in areas of culture and customs.
Fact File

History
There are divided opinions about the real history of Amritsar. Some say it was gifted by Akbar to Guru Amar Das; some believe that it was actually acquired by Guru Ram Das and still others are of the opinion that it was bought by the Guru. 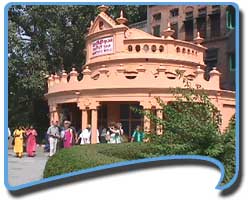 However, the popular belief about Amritsar remains that it was laid in 1574. In the pre independence era Amritsar was one of the main educational centers of the country. Till date the Hindu College, Khalsa College, DAV College and many other institutes in the city of Amritsar are some of the leading institutions in India.
Best Season, Climate, and Clothing:
In Amritsar, one of the choicest tourist destinations in India, you will find an extreme climate with scorching summers and chilly winters. Monsoons generally hit the city of Amritsar around early July. However the best time to travel to Amritsar is between October and March. Tourist attractions in Amritsar

Golden Temple:
Also known as Sri Harmandir Sahib, the Golden Temple was built by Guru Ram Das during 14th century, is acclaimed as one of the most revered sites of Sikh religion. Displaying both Hindu and Muslim styles of architecture, it exhibits a huge golden dome. Its architectural brilliance draws the interest of all and sundry around the globe. Although principally a pilgrimage spot for the Sikhs, it is one of the greatest tourist attractions in Amritsar.
Jallianwala Bagh -
One name that strikes your mind about Amritsar is the Jallianwala Bagh. Sited near the Golden Temple, it bears witness to the tragedy called Jallianwala Bagh Massacre during the British Raj. General Dyer set a congregation on fire at the venue where several Punjabis gathered for Baisakhi (New Year) celebrations on 13 April 1919.

Tarn Taran –
At approximately 25 kms to the south of Amritsar stands the Tarn Taran – a lake which bears holy as well as medical associations attached to it. Constructed by Ranjit Singh, it has fairs that are celebrated on every ‘Amavas’ night.
at March 03, 2018