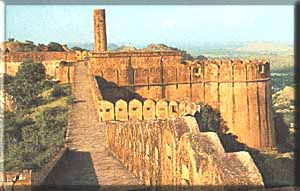 The magnificent and impressive Jaigarh fort was built by Maharaja Sawai Jai Singh in 1726, to provide a strong defence to Amber. It was also the location of the royal treasury. The fort is located atop a hill called the “Chilh ka Tola” or eagle’s hill. The distance of the fort from Jaipur city is 15 kilometers.

The Jaigarh fort is one of the strongest and most famous forts in Rajasthan. The defenses of the forts were considered so strong by rival states that it was never attacked during its functional existence. The fort is important for tourism in Jaipur, as it attracts a large number of tourists every year.

During the reign of the Kacchwa rulers, Jaigarh was the chief center of artillery production. The most important part of the defense of Jaigarh was the powerful cannons, which were designed to wreak havoc in the enemy ranks. The most important and famous piece of artillery in the fort is the imposing cannon named Jaivana. This is the world’s largest canon on wheels with superlative dimensions, considering its age of origin. The cannon weighs at 50 tons, has a barrel length of 8 meters and a trajectory of 25 kilometers.

The fort has a 5 kilometers long canal that was used to collect rainwater from the hills for storage inside the fort. There are three underground tanks that store this water. Legend has it that these tanks were used by the royalty to store vast treasures, although efforts to uncover these treasures have so far been unsuccessful.

The Amber fort was originally a palace inside the Jaigarh fort. Today, the Amber fort is a famous fort in its own right. It is located just below the Jaigarh fort, conneceted to it by fortified passages. The Amber fort is considered to be one of the best tourist spots in Jaipur. The palace is a fine blend of Mughul and Rajasthani architecture, and there are many beautifully adorned buildings to be seen inside.

Among the other things to look out for in the fort, including the ramparts and the massive gates, the armory, cannon foundry, and the Diya burj are worth special mention. An elephant ride is the best way to explore this proud bastion of the rulers of Amber.


The beautiful panoramic view as seen from the fort is one of the most memorable experiences in Jaipur, and an apt finale to the wonderful tour of the Jaigarh Fort.
at March 04, 2018