Nanaji Deshmukh is a person who needs no introduction. His sharp intellect and extraordinary organizing skill has put an indelible mark in Indian politics.

Born on October 11,1916 in a modest Maharashtrian family at Kadoli, a small town in Parbhani district, Nanaji had little money to pay for his tuition fees and books. But he had such a burning zeal and desire for education and knowledge that he did not shy away from working as a vendor and selling vegetables to raise money for realising his objective.

Nanaji was deeply inspired by Lokamanya Tilak and his nationalist ideology. He showed keen interest in social service and activities. His family was in close contact with Dr. Hedgewar who was a regular visitor to the family of Nanaji. He could discern an immense hidden potential in Nanaji and encouraged him to attend RSS shakahas.

In 1940, after the death of Dr. Hedgewar, many youngsters inspired by him joined the RSS in Maharashtra. Nanaji was among those enthused youths who joined the RSS devoting their whole life in service to the Nation. He was sent to Uttar Pradesh as a Pracharak. At Agra he met Deendayalji for the first time. Later, Nanaji went to Gorakhpur as a pracharak where he took great pains to introduce Sangh ideology in the eastern UP. It was not an easy task at that time as the Sangh had no funds to meet even day-today expenses. He had to stay in a Dharmashala but had to keep on changing Dharmashalas as no one was allowed to stay there for more than three days consecutively. Ultimately, he was given shelter by Baba Raghavdas on the condition that he would also cook meals for him.

Within three years, his hard work bore fruits and almost 250 Sangh Shakhas cropped up in and around Gorakhpur. Nanaji always laid great emphasis on education. He established India's first Saraswati Sishu Mandir at Gorakhpur in 1950. It reflects Nanaji's love for education and knowledge.

When in 1947 the RSS decided to launch two journals "Rashtradharma" and "Panchjanya" and a newspaper called "Swadesh" Shri Atal Bihari Vajpayee was assigned the responsibility of the editor and Shri Deendayalji was made the Margdharshak with Nanaji as the Managing Director. It was a challenging task as the organization was hard up for money to bring out the publications, yet it did never dampen their spirits and these publications gained popularity and recognition.

Mahatma Gandhi's assassination led to imposition of ban on the RSS and publication work came to a grinding halt. A different strategy was adopted keeping the ban in mind and Nanaji was the brain behind underground publication work by the RSS those days. When the ban was lifted and it was decided to have a political organization, Jana Sangh came into being. Nanaji was asked by Shri Guruji to take charge of Bharatiya Jana Sangh in Uttar Pradesh as party Secretary. Nanaji had worked as RSS pracharak in Uttar Pradesh and his groundwork proved of a great help in organizing BJS at the grass roots. By 1957 BJS had established its units at each and every district in Uttar Pradesh and credit for this goes to the Nanaji who had extensively traveled all over the State.

Soon, BJS became a force to reckon with in Uttar Pradesh. In 1967 BJS became the part of United Legislature Party Government headed by Chaudhary Charan Singh. Nanaji played a crucial role in evolving the alliance as he enjoyed good relations with Charan Singh and Dr. Ram Manohar Lohia. He was successful in bringing leaders of different political background on one platform to give Uttar Pradesh its first non-Congress government.

A political giant, like Chandra Bhanu Gupta, had to face one of the biggest challenges of his life when Nanaji outwitted him not once but thrice. On one occasion, he planned a strategy to defeat the Congress nominee and CB Gupta's favorite in Rajya Sabha. When CB Gupta himself contested elections from Lucknow in 1957, Nanaji crafted an alliance with socialist groups and helped Babu Triloki Singh in registering an impressive win over Gupta. Shri Gupta faced another embarrassment when he was again defeated at Maudaha in Uttar Pradesh.

In Uttar Pradesh BJS gained strength from Deendayalji's margdarhsan, Atalji's oratory skills and Nanaji's organizational work and it emerged as an important player in the State politics. Nanaji always shared good relations not only with his party colleagues but also with his Opponents. Shri CB Gupta, who suffered many humiliating, defeats at the hands of Nanaji, yet he continued to have great respect for him and called him 'Nana Phadanvis '. His relations with Dr. Ram Manohar Lohia changed the course of Indian politics. Once he invited Dr. Lohia in BJS karaykarta sammelan where he met Deendayalji for the first time and this association brought the BJS closer to socialist parties in exposing the Congress and its misrule.

Nanaji actively participated in Bhoodan Movement started by Vinoba Bhave. By spending two months with Vinoba he was inspired by the success and appeal of the movement. When Jai Prakash Narayan gave the call for" Total Revolution" he responded by giving total support to this movement. When the Janata Party was formed Nanaji was one of its main architects. Janata Party stormed into power by sweeping off the Congress and Nanaji was elected from Balrampur parliamentary constituency in Uttar Pradesh. When he was offered ministerial berth by the then Prime Minister, Shri Morarjee Desai he politely refused it. For him politics was never a career but a mission. He was not the person who would stick to politics or office come what may. Of his own volition he announced his retirement from politics in presence of Jai Paraksh Narain and since then never looked back.
Nanaji is now devoting his entire time to Deendayal Research Institute that he himself established way back in 1969. He established Chitarkoot Gramodya Vishwavidyalaya in Chitrakoot, India's first rural university and was its first Chancellor. NDA Government headed by Shri Atal Bihari Vajpyaee nominated him as an MP in Rajya Sabha in the year 1999 as recognition to his services to the nation. 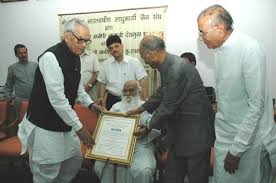