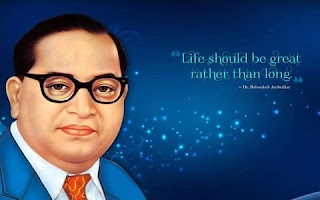 Bhimrao Ambedkar was born to Bhimabai Sakpal and Ramji on 14 April 1891 in Madhya Pradesh. He was the fourteenth child of his parents. Ambedkar;s father was a Subedar in the Indian Army and posted at Mhow cantonment, MP. After the retirement of his father in 1894, the family moved to satara. Shortly after, his mother passed away. Four years later, his father remarried and the family shifted to Bombay, where he cleared his matriculation in 1908. His father Bhimabai Sakpal died in Bombay, in 1912.
Ambedkar was a victim of caste discrimination. His parents hailed from the Hindu Mahar caste, which was viewed as “untouchable” by the upper class. Due to this, Ambedkar had to face severe discriminations from every corners of the society. a The discrimination and humiliation haunted Ambedkar even at the Army school, run by British government. Fearing social outcry, the teachers would segregate the students of lower class from that of Brahmins and other upper classes. The untouchable students were often asked by the teacher to sit outside the class. After shifting to Satara, he was admitted to a local school but the change of school did not change the fate of young Bhimrao. Discrimination followed wherever he went. In 1908, Ambedkar got the opportunity to study at the Elphinstone College. Besides clearing all the exams successfully Ambedkar also obtained a scholarship of twenty five rupees a month from the Gayakwad ruler of Baroda, Sahyaji Rao III. Political Science and Economics were the subjects in which he graduated from the Bombay University in 1912. Ambedkar decided to use the money for higher studies in the USA.
After coming back from the US, Ambedkar was appointed as the Defence secretary to the King of Baroda. Even, there also he had to face the humiliation for being an ‘Untouchable’. With the help of the former Bombay Governor Lord Sydenham, Ambedkar obtained the job as a professor of political economy at the Sydenham College of Commerce and Economics in Bombay. In order to continue his further studies, in 1920 he went to England at his own expenses. There he was awarded honor of D.Sc by the London University. Ambedkar also spent few months at the University of Bonn, Germany, to study economics. On 8 June, 1927, he was awarded a Doctorate by the University of Columbia.