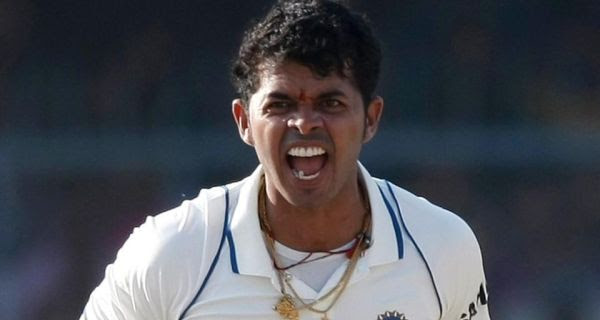 
Former India test bowler Shanthakumaran Sreesanth and two other players have been arrested by Delhi police on suspicion of spot-fixing in the Indian Premier League, sports officials said on Thursday.
India’s cricket board (BCCI) immediately suspended Sreesanth and his Rajasthan Royals team-mates Ankeet Chavan and Ajit Chandila and promised that stricter punishments would await if they are found guilty.
“The BCCI has zero tolerance to corruption. We will offer all co-operation to the Delhi police and all other authorities in their investigations in this matter,” BCCI secretary Sanjay Jagdale said in a statement.
Spot-fixing involves the manipulation of individual incidents within a match which may not affect the outcome of the contest, most famously exposed in a London trial and jailing of three Pakistan cricketers in 2011.
Delhi Police commissioner Neeraj Kumar said the three Indian bowlers took money to concede pre-determined number of runs in three different IPL matches.
For 4 million Indian rupees (€56,600) Sreesanth agreed to concede 13 or more runs in his second over of a May 9th match at Mohali, Kumar told a news conference.
As was agreed upon, Sreesanth tucked a towel in his waistband to signal to the bookie, giving him enough time to “indulge in heavy betting”, the police chief said.
“Sreesanth bowled the first over without the towel. In the second over, he put a towel in his trousers and then, in order to give bookies time to indulge in betting, he did some warming up, some stretching exercises, and then went on to give 13 runs,” Kumar said.
Paceman Sreesanth, 30, has a chequered past littered with on-field antics that frequently landed him in trouble since his 2006 test debut at home against England.
The combative right-arm speedster has played 27 tests and 53 one-day internationals but injuries and disciplinary issues have kept him out of the side since late 2011.
Police have arrested 11 bookies and were hunting for more but Kumar ruled out arrest of any other player or involvement of any of the overseas players.
“There are overseas connections and we’ve proof that the underworld is involved,” said Kumar, adding “the mastermind is sitting abroad” but declining to reveal details.
Last year, the Indian cricket board banned one uncapped cricketer for life and handed out lesser punishments to four others following similar allegations of corruption in domestic cricket.
“The BCCI engages the services of the anti-corruption wing of the ICC to educate and monitor players and support staff in prevention of corruption of any form in the game,” Jagdale said.
“It is wholly unfortunate that despite such education, best playing conditions and terms of engagement offered, some players seem to be indulging in such activity.”
Legal gambling in India is confined to horse-racing while casinos are allowed only in a couple of states.
In such an atmosphere, illegal syndicates continue to thrive and Indian media estimates put the amount bet on 2009 IPL Twenty20 competition at €331 million.
Pakistan players Salman Butt, Mohammad Asif and Mohammad Amir were jailed in Britain for their role in a spot-fixing scandal relating to a test match against England at Lord’s in August 2010.
The International Cricket Council (ICC) subsequently banned the three players for a minimum of five years.
at October 06, 2017