“After 70 years of independence, if we ask three Muslim freedom fighters of India, then most of
the people won’t be able to answer this question…”
The role of Muslims in India’s struggle for independence is glorious episode in the history of India. It represents
the Valor, Sacrifice and patriotism of Indians. The movement lasted for about a century. In this historic struggle
Muslims play a definite role, shared the responsibility of liberating India from the yokes of British Imperialism
with Hindu brethren, underwent untold sufferings made great sacrifices and thus served the country commendably.
The forgotten history of the sacrifice of Muslims,
The divide and rule policy adapted by the British to 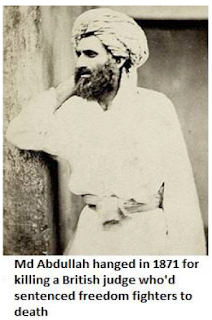 consolidate and perpetuate their power in India, the circumstances
that led to the partition of British India and the gruesome
communal riots that erupted eventually broke the unity of British.
The wars with the Pakistan and communal disturbances did bring
in mental barriers between Hindus and Muslims. The communal
fanatics from both sides and particularly the Hinduthva forces
readily used this perturbing situation successfully to further widen
the gulf.
Ironically in our present day India, even freedom fighters are
judged on the basis of their religion. Many people believe
Muslims didn’t contribute to India’s independence from the
British role. It is because, there are not many sources available
that disclose Muslims contribution to India’s independence.
To initiate a war and getting succeeded on the British
Empire is not a possible thing to the rulers of other dynasties. But
the ruler of Mysore in first Anglo – Mysore war(1767 – 69) Hyder
Ali gain some measure of success against the British, almost
capturing madras, Later in second Anglo Mysore war (1780- 84)
Tippu Sultan s/o Hyder Ali defeated Baille at the battle of  Pollilur in September 1780, and Braith waite at Kumbakonam in  Feb 1782.
He continued war even after his father death. Finally the war  ended with the last British Indian treaty with an Indian ruler on equal footing.

Later, Another two wars occurred witnessing the downfall of Tippu. He could survive with Mysorean
rockets used by him in the battles were very much advanced then British east India company. After his  downfall the British captured a number of Mysorean iron rockets they were influential in British rocket development. Inspiring the coverage rocket, which was put in use in the Napoleonic wars.

Roles of Muslims in revolts

Battle of plassey ( June 23, 1757 ) : It was Nawab Siraj UD. Daulah who first
awakend Indian rulers and gave a call to oppose the British. He however , lost the battle and was
executed at young age 24 followed by Tippu sultan who was killed by Hard Wellesley in 1799. 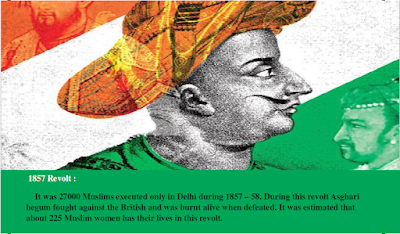 It was 27000 Muslims executed only in Delhi during 1857 – 58. During this revolt Asghari
begum fought against the British and was burnt alive when defeated. It was estimated that
about 225 Muslim women has their lives in this revolt.

The contribution of Muslim revolutionaries can be witnessed from the first half of 19th century. The
Farazi and the Wahlabi movements has distributed the pace of British plan in the initial stages of
expansion. It was organized by Syed Ahmed Barlevi he appealed to all Hindus and Muslims to over
the British and he was killed in 1831 in Balakot.

Likewise, the present generation doesn’t know about khan Abdul gaffer khan. A great nationalist
who passed 45 years of his 95 years of life in jail for the freedom of India and this awarded ‘Bharat
Ratna’ in 1987.
Barkatullah and Syed Rehmat shah of Hadar party sacrificed their lives. Umar Subhani an Industrialist and millionaire presented blank cheque to Gandhi for congress expenses. Maulana Hasrat Mahani, with his poetry, infused zeal of freedom in young hearts. 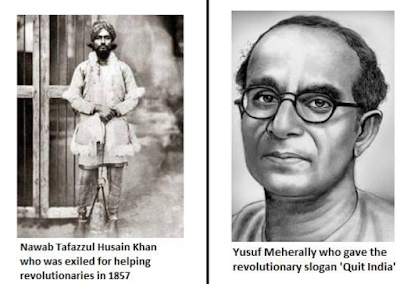 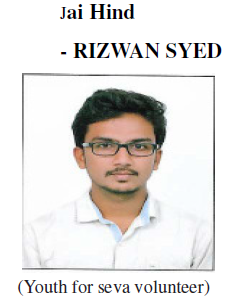