Miscarriage is the most familiar pregnancy obstacle affecting up to 15% of all clinically recognized pregnancies. annexin A5 gene is a well-recognized predisposition factor for recurrent spontaneous abortion. Annexin A5 is both Ca2+ and phospholipids binding protein that is localized at the surface of the placental syncytiotrophoblast layer and performs a vital role in anticoagulant function in the maternal blood at the inter villous space. It has been recently shown that polymorphisms in the promoter region of the annexin A5 gene (ANXA5) are significantly associated with RPL. The present study focuses on the comprehensive analysis of the functional and structural impact of all known SNPs of ANXA5 gene by using computational approaches. Comprehensive analysis was performed to filter the most probable mutation that might be associated with RSA. It resulted in identification of SNPs which are most deleterious and disease associated. The study reveals that these two rs111418524, rs41278081 SNPs have more significant effect on structure and function of the protein.
Keywords: Recurrent spontaneous abortions, Annexin A5 gene, Single Nucleotide polymorphism, SIFT, POLYPHEAN, MUTANT-I, HOPE.

Pregnancy is a complex, heterogenous, biological phenomenon in which the embryo develops into a fetus within the female uterus. Due to various etiological factors, the growing embryo that is unable to survive is expelled from the pregnant mother at different gestational ages and this is referred to as pregnancy loss or abortion. Pregnancy loss occurs in 10 to 15% of all pregnancies, of which 1-2% are recurrent [1]. According to WHO, Recurrent pregnancy loss has been defined as the loss of a fetus weighing d”500g, at early period of gestation (20-22weeks) [2]. Recurrent pregnancy loss (RPL) is a complex, multi factorial condition with a polygenic background. [3] There are 30 genesshowing different levels of expression between normal and RPL patients

ANXA5 is a member of the annexin protein family. Annexin A5 (placental anticoagulant protein, encoded by ANXA5 gene) normally occurs on the placental villi, and its expression appears to be decreased in the presence of antiphospholipid antibodies (APL). Annexin A5 functions as an inhibitor of coagulation by its ability to bind to the anionic phospholipids exposed on the surface of platelets. It is abundantly expressed in the normal placenta, and the encoding gene possesses a complex promoter region that is subject to intricate regulation. It has been shown that single-nucleotide polymorphisms (SNPs) in the promoter region of the ANXA5 gene are significantly associated with recurrent pregnancy loss (RPL), and that women with the M2 haplotype have a 2.42- fold higher risk of pregnancy loss than non carriers.

More recently, it has been shown that an SNP in the 50 -untranslated region of theANXA5 gene (SNP5: 302T>G) serves as a major risk determinant of RPL.

SNPS exist throughout the genome and can be divided into several groups. Among the different kinds of SNPs, a nonsynonymous SNP in the coding arena of a gene (genetic code) is vital as long as it alters the amino acid form. Consequently, such alterations may have an impact on protein structure, function and sub cellular localization. Although pinpointing the effects of many non-synonymous SNPs using biochemical analysis has been challenging. Computational tools can predict their effect on protein activity and stability. Several research articles stated the effectiveness in identifying the
deleterious and disease-associated mutations, thus predicting the pathogenic non-synonymous SNPs in correlation to their functional and structural damaging properties [5, 6, 7, 8]

In this study, Insilco methods were used to test the possible effect of the missense mutations rs111418524, rs41278081 on the structure and function of ANXA5 (annexin Protein)

Polymorphism Phenotyping-2 (PolyPhen-2) tool was used to investigate the possible effect of nsSNPs on protein. The predictions obtained are rooted in physical and evolutionary comparative considerations and naïve Bayes classifier which uses eight sequences and three structures to calculate the deleterious effects of nonsynonymous variants [11]. If the scores of PolyPhen-2 are between 0.00 to 0.99, the prediction is to have a benign effect, and if the scores are in the range of 1.0 to 1.99 it could be possibly damaging and if the score is more than 2.0, it will be predicted as probably damaging to the protein [12].

SIFT tool was used to predict whether rs111418524, rs41278081 affect ANXA5 function, this program was developed by Ng and Henikoff, based on sequence homolog [9]. The Concept on which this tool predicts upon is that protein functions are inter related. Thus any change occurs in an evolutionary conserved region, it is less tolerable than a change in an un-conserved region. SIFT algorithm uses a modified version of PSIBLAST [10]. Accordingly, any position with a tolerance index of less than 0.05 is predicted to be deleterious and those with tolerance index greater than
or equal to 0.05 are predicted to be tolerated.

To predict the effect of SNP on protein stability, I-Mutant 2.0 was used. The differences in free energy (—dG) between the unfolding Gibbs free energy values of the mutated protein with that of the wild type (Kcal/mol) are used as a basis for the prediction by I-Mutant 2.0. Positive —dG values resemble high stability of mutated protein and vice versa. [13]

Protein analysis using Protein Analysis through Evolutionary Relationship (PANTHER) tool organize proteins with families and subfamilies of evolutionarily related proteins relying on function, pathway or biological process of the proteins [14]. To estimate whether nsSNPs have and functional influence on the protein, PANTHER uses subPSEC score, which is calculated according to evolutionary related proteins. SubPSEC score of less than - 3 is predicted to be deleterious [15].

Have your Protein Defined (HOPE) tool was used to assess the structural impact of rs111418524, rs41278081on transferrin [16]. These approaches analyzed the impact of the mutation, and the findings showed a structural impact. This report also shows equivalence to contacts such as metal, DNA, hydrogen bonds, and ionic interactions and evaluates whether a mutation impacts an essential contact, structural areas together with motifs, domains, and trans-membrane domains. These tools assure that the foremost dependable method to acquire data and facts is used, i.e., data regarding the “actual protein structure” that provide annotated information in UniProtKB that is utilized by prediction with DAS servers [17].

rs111418524, rs41278081 was submitted to different softwares, the SIFT SIFT program to check for the tolerance index (TI), PolyPhen-2 to examine the possible impact of an amino acid substitution on the structure and function of a protein. I-Mutant 2 to test for the stability of the protein and finally submitted to PANTHER, to confirm the alignment of evolutionarily related proteins.

-2.57, -2.48 this negative —dG value indicate the low stability of the mutated ANXA5, and finally SubPSEC score of PANTHER is 0.542, 0.543 which indicates deleterious effect on protein function.

TABLE: I, RESULTS OF SNPS FROM DIFFERENT COMPUTATIONAL TOOLS.


To find out possible impact of these mutations on ANXA5 structure, how your Protein Explained (HOPE) tool was used. This tool was developed at the centre for molecular and bio-molecular informatics (CMBI), department of bioinformatics, Radboud University. HOPE evaluates the effect of the mutation on the following features: the location and the interaction of the mutated residue, in addition weather Variants in this residue is common in other homologous proteins. 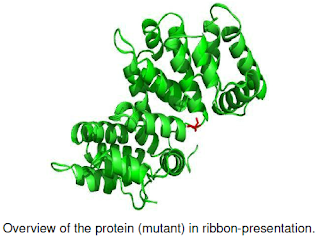 encoded as missense mutation of a serine into a glycine at position 246, each amino acid has its own specific size, charge, and hydrophobicity-value. The original wild-type residue and newly introduced mutant residue often differ in these properties.
The mutant residue is smaller than the wild-type residue. This will cause a possible loss of external interactions. (Fig: 4) Glycine is very flexible and can disturb the required rigidity of
the protein at this position. The mutated residue is located in a domain that is important for binding of other molecules. The mutation might disturb the interaction between these two domains and as such affect the function of the protein.

The wild-type and mutant amino acids differ in size. The 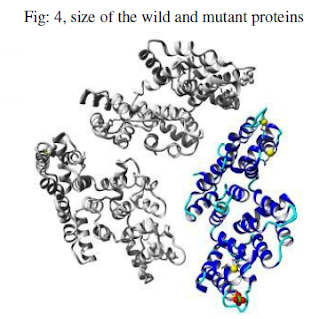 The present study offers an insight into the genotype–phenotype 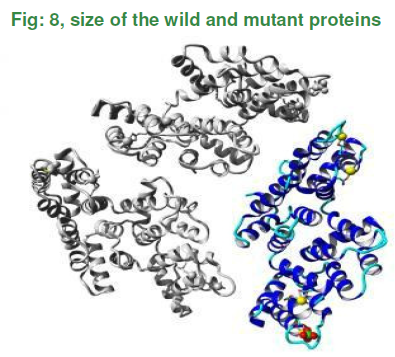 association SNPs associated with ANXA5 gene. Our study identified
two pathogenic SNPs: rs111418524(S246G) and rs41278081(I81T)
in ANXA5. The analysis of SIFT, PolyPhen, Mutant-I, Panther and
Hope has revealed their respective major consequences on the mutated
ANXA5 gene, and also revealed their plausible malfunctioning
mechanism via their structural destabilization. Compared to the wild type, all the selected mutations were altering the structural behavior of the protein, however S246G (rs111418524) predicted to cause the most damage to the protein’s structural features followed by rs41278081 (I81T). Overall, the present computational approach will provide a comprehensive view on destabilizing mechanisms of Annexin A5 protein SNPs in ANXA5. The knowledge thus acquired through this present study is expected to help in prioritizing the important SNPs to be selected for further wet lab evaluations, and is of high value especially when designing huge population based genotyping studies.


“The wild-type and mutant amino acids differ in size. The mutant residue is smaller than the wild-type residue. The mutation will cause an empty space in the core of the protein.”