Located on the banks of Bay of Bengal, at 65 km from the city of Bhubaneswar, the small town of Konark in Orissa has a significant past and adds considerably to the Indian cultural horizon on the whole. The first thing that attracts you about Konark is the Sun Temple, which sees the footfalls of several travelers and historians at different points of time from various corners of the world. Believed to have been built by Narashimhadev I of the Ganga dynasty in the mid-13th century, to commemorate his victory over the Muslims, Konark, is devoted to the Sun God or Surya. Designated as a (UNESCO) World Heritage Site by the United Nations, it is an amazing piece of art reflecting Orissa’s medieval architectural bent.
Fast Facts 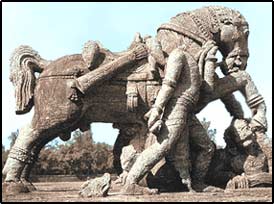 Having derived its name from the two words, kona (corner) and arka (sun), the city of Konark owes its name to Konarka, the presiding deity of the Sun Temple. Sun God is revered and worshipped widely in many parts of the world. In India, this tradition goes back to the period of Rig Veda. The Puranas mention the name of Rishi Dirghatamas as the first antecedent of prince Kalinga, after whom the territory was christened. (Kalinga was the former name of Orissa.) The hymns in the Rig Veda that allude to the glory of the Sun were supposedly written by Rishi Dirghatamas.

Konark was one of the first centres of Sun worshipping in India. The place finds mention in the Puranas as Mundira or Mundirasvamin, a name that was later restored by Konaditya or Konarka. Besides the Puranas, other religious texts also indicate the existence of a sun temple at Konark much earlier than the present temple.
The erstwhile busy port of Kalinga, the town of Konark maintained good maritime trade relations with Southeast Asian countries. However, it fell into neglect in the early 17th century subsequent to its desecration by an ambassador of the Mughal emperor Jahangir.

However, legend says that the temple was built by Samba, the son of Lord Krishna. Samba is believed to have been afflicted by leprosy, as a result of his father’s curse on him. After 12 years’ penance, he was healed by Surya, the Sun God, in whose honour he constructed this temple.

Besides the above, there are other tourist attractions in Konark as well. Konark Archaeological Museum, Konark Beach, Ramachandi temple and Konark Math are some amongst them.
Best Season, Climate and Clothing
Konark is best visited between October and March. The summers in Konark are scorching hot with temperature soaring up to as high as 43 degrees Celsius. The place experiences heavy rainfall between July and September.