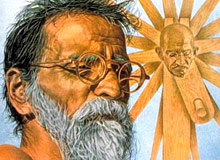 Acharya Vinoba Bhave was a freedom fighter and a spiritual teacher. He is best known as the founder of the 'Bhoodan Movement' (Gift of the Land). The reformer had an intense concern for the deprived masses. Vinoba Bhave had once said, "All revolutions are spiritual at the source. All my activities have the sole purpose of achieving a union of hearts." In 1958, Vinoba was the first recipient of the international Ramon Magsaysay Award for Community Leadership. He was also conferred with the Bharat Ratna (India's highest civilian awards) posthumously in 1983.

Life
Vinoba Bhave was born at Gagode in Kolaba district, Maharashtra on 11 September, 1895. His original name was Vinayak Narahari Bhave. His mother Rukmini Devi was a very religious person. At a very young age Vinoba was deeply interested in Mathematics. In 1916, on his way to Mumbai to appear for the intermediate examination, Vinoba Bhave put his school and college certificates into a fire. It was believed that Vinoba took the decision after reading a piece of writing in a newspaper written by Mahatma Gandhi.

Association with Gandhi
After a series of exchange of letters between Gandhi and Bhave, on 7 June, 1916 Vinoba went to meet Gandhi. Five years later, on 8 April, 1921, Vinoba went to Wardha to take charge of a Gandhi-ashram there. During his stay at Wardha, Bhave also brought out a monthly in Marathi, named, `Maharashtra Dharma'. The monthly comprised of his essays on the Upanishads. Over the years, the bond between Vinoba and Gandhi grew stronger and his involvement in constructive programmes for the society kept on increasing.

In 1932, accusing Vinoba Bhave of conspiring against the colonial rule, the British government sent him to jail for six months to Dhulia. There, he told the fellow prisoners about the different subjects of 'Bhagwad Gita', in Marathi. All the lectures given by him on Gita in Dhulia jail were collected and later published as a book.

Till 1940, Vinoba Bhave was known only to the people around him. Mahatma Gandhi, on 5 October, 1940, introduced Bhave to the nation by issuing a statement. He was also chosen as the first Individual Satyagrahi (an Individual standing up for Truth instead of a collective action) by Gandhi himself. 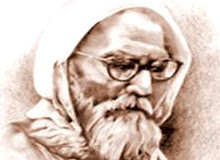 In 1951, Vinoba Bhave started his peace-trek on foot through the violence-torn region of Telangana. On April 18, 1951, the Harijans of the Pochampalli village requested him to provide them with around 80 acres of land to make a living. Vinoba asked the landlords of the village to come forward and save the Harijans. To everybody's surprise, a landlord, got up and offered the required amount of land. This incident added a new chapter in the history of sacrifices and non-violence. It was the beginning of the Bhoodan (Gift of the Land) movement. Following this, Vinoba Bhave traveled all across the country asking landlords to consider him as one of their sons and so give him a portion of their land. He then distributed those portions of land to the landless poor. Not a single people around him ever saw him getting angry and violent. He always followed the path of truth and Non-violence, as shown by Mahatma Gandhi.

Controversy
Vinoba Bhave received serious brickbats in 1975 for supporting the state of emergency imposed by the then Prime Minister Indira Gandhi. Bhave advocated that the emergency was required to teach people about Discipline. According to many scholars and political thinkers, Vinoba Bhave was an imitator of Mahatma Gandhi.

Death
In November 1982, Vinoba Bhave fell seriously ill and decided to end his life. He also refused to accept any food and medicine during his last days. On 15 November, 1982, the great social reformer of India passed away.
at March 09, 2018