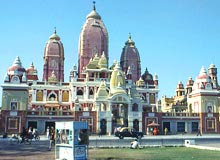 Laxminarayan Mandir is one of the major temples and landmarks of Delhi. During 1933-39, Laxmi Narayan Temple was built by Mr. B.D. Birla of Birla Group of Industries, one of the famous business tycoons of India. Being constructed by the Birlas, the temple came to be known as Birla Temple. Located on Mandir Marg near Connaught Circus in Delhi, the temple is easily accessible from the city by metro, local buses, taxis and auto-rickshaws.

Birla Mandir is first of the temples made by Birlas across the country and till date, the funds to support this temple come from Birla family. The famous temple is accredited to have been inaugurated by Mahatma Gandhi in 1939. At that time, Mahatma Gandhi kept a condition that the temple would not be restricted to the Hindus and people from every caste would be allowed inside. In those times, the condition was really worked upon; still people visit this temple with full devotion.

Laxminarayan Temple is dedicated to Lord Vishnu, the preserver and his consort, Goddess Lakshmi. The architecture of the Temple looks imbibed from the Orissan Style. The temple has tall spires and it looks magnificent raised in red sandstone. The tallest spire of the temple extends to the height of 165 feet whereas the additional spires lengthen to 116 feet. The exotic structure of the temple comprises sculptures, tall spires and Jali work making it a remarkable to behold.

Apart from the idol of presiding deity, the temple has remarkable idols of Goddess Durga, Lord Shiva, Lord Ganesha, Lord Rama and Lord Hanuman. Geeta Bhawan is a huge hall that is embellished with striking paintings, derived from the scenes of Indian mythology. On the rear end, one can trace gardens and fountains in the temple complex. The two-storied verandahs, on the three sides, are overlooked by the interior court.

For tourists, temple authorities have made adequate arrangements of guest house in its complex. Many International scholars come here to learn about the Hindu religion and for the time, they usually stay in the guest house of Birla Temple. Every year, Janmashtami (birthday of Lord Krishna) is celebrated with full gusto and fervor in this temple. In fact, Birla Mandir is famous for its celebration of Janmashtami. People in large number come to visit this temple of spiritual legacy.
at March 07, 2018