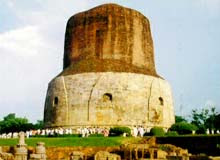 Dhamekh Stupa at Sarnath is one of the prominent Buddhist structures in India. Dhamekh Stupa was constructed by the great Mauryan king, Ashoka. The Dhamekh Stupa is cylindrical in shape and about 34 m high and 28.3 m in diameter. The lower portion of the Stupa is covered completely with beautifully carved stones. The borders of Dhamekh Stupa have delicately carved geometrical and floral designs and figures of humans and birds. The base of the Stupa is made of stone with the upper areas of brickwork which probably once had a carved stone fencing. It is believed that Lord Buddha delivered his first sermon at the Dhamekha Stupa. Dhamekh Stupa bears special significance at Sarnath as it signifies the "seat of the holy Buddha", as he proclaimed his faith.

Buddhist pilgrims belonging to different countries visit this place for circumambulation of this sacred Stupa and to offer worship to Buddha. Besides the Dhamekh Stupa, Sarnath also has the ruins of Dharmajajika Stupa and that of the original Mulgandha-kuti vihar. Buddha is said to have rested and meditated here while in Sarnath. Emperor Ashoka (273-232 B.C.) was a staunch follower of Buddhism and visited Sarnath and laid the foundation of the Buddhist Sangha here. The Ashoka Pillar bears testimony to his visit. The Lion Capital on top of this pillar is now the National Emblem of India.
at March 07, 2018