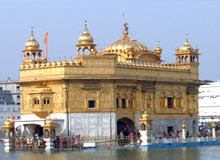 Generally, one can find picture of Golden Temple in the homes of almost every Sikh round the World. The Sikhs wish to pay a visit and obeisance to Harmandir Sahib. The advent of the Darbar Sahib is associated with the history and ideology of the Sikhism. The architecture of the temple encompasses various symbols that are linked with other places of worship. These symbols portray the sense of forbearance and approval, which is put forward by the Sikh philosophy.

History
Turning back the pages of historical accounts, one can find that Shri Harmandir Sahib had been attacked and damaged numerous times by the Afghan and other invaders. Every time, the Sikhs gave up their lives, to facilitate the liberation of the holy shrine and bring back its sacredness. Amongst the martyrs, Bhai Mani Singh, Sukha Singh and Mahtab Singh were the remarkable personalities, whose efforts actually aid to liberate the temple. In 1644, Guru Arjun Sahib laid the foundation of the Swarn Mandir in the company of Hazrat Mian Mir, who was a Muslim saint.

Guru Arjun Sahib himself took the charge of construction work. Later, he was backed by the well-known Sikh celebrities like Baba Budha, Bhai Gurdas, Bhai Sahlo and many other committed Sikhs. Contrasting the structures of other temples, Golden Temple was erected on a lower level. Harmandir Sahib is made open from all the four sides and once again, it contradicts the temples that have only one gate for entry and exit. As a consequence, a symbol of new faith emerged in the religion of Sikhism. The Golden Temple is open to people from all religions, castes, creed and sex.

Architecture
Built on a square platform, Golden Temple looks celestial with its gilded appearance. The temple has doorways on its each side. Darshani Deori is an arch that stands at the shore end of the boardwalk. The door frame of the Darshan Deori extends to 10 ft in height and 8.6 ft in breadth. The panes of the door are festooned in an artistic manner. It leads to the boardwalk (bridge), which takes to the main shrine of Shri Harmandir Sahib.

The boardwalk is linked with the 13 ft wide feet 'Pardakshna', which is a circumambulatory path. This path runs round the main shrine and escort to the 'Har Ki Pauri' (Steps of God). At the first floor, the reading of Guru Granth Sahib goes for 24*7 hours. The façade that faces the bridge is ornamented with recurring cusped arches. On the top of it, there is a low fluted 'Gumbaz' (Dome) with lotus petals motif at its base. The inverted lotus at the zenith supports the 'Kalash' that has a striking 'Chhatri' at the end.

The remarkable architecture of Swarn Mandir is often cited as the finest architectural specimens of the world. Amrit Sarovar (Pool of Nectar) is the main attraction of this temple, which is believed to have water with curative properties. People from far and near come to take this holy water of Amrit Sarovar. The Golden Temple is a religious place of spiritual importance and significance. Devotees from all over the world come to pay their homage at this blessed place.
at March 06, 2018