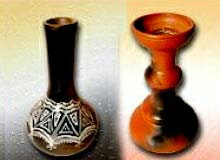 The history of Indian handicrafts goes back to almost 5000 years from now. There are numerous examples of handicrafts from the Indus Valley Civilization. The tradition of crafts in India has grown around religious values, needs of the common people and also the needs of the ruling elites. In addition to this foreign and domestic trade have also played an important role in the evolution of different craft forms in India. The craft traditions of India have withstood the depredation of time and several foreign invasions and continue to flourish till date. It is mainly due to the open mindedness of the Indian handicraftsmen to accept and assimilate new ideas.

Going back to the Indus valley civilization we find a rich craft tradition and a high degree of technical excellence in the field of pottery, sculpture (metal, stone and terracotta), jewelry, weaving etc. The Harappan craftsmen not only catered to all the local needs but traded with the outside world via sea routes. In the Vedic age (1500 B.C.), we find numerous references in the Vedas of artisans involved in pottery making, weaving, wood craft etc. The Rig Veda refers to a variety of pottery made from clay, wood and metal. There is a reference to weavers and weaving.

In the Mauryan age we find great development in the field of sculpture. In this period more than 84,000 stupas are said to be built in India, including the famous Sanchi Stupa, which has beautiful stone carving and relief work done on it. Numerous sculptures from Bharhut, Mathura, Amravati, Vaishali, Sanchi etc show female figures adorned with a display of jewelry, which continues to inspire contemporary jewelry making. The period between 1st century B.C. and 1st century A.D. was a period of political confusion as a result of foreign invasions. The impact of this turmoil is visible in the amazing Buddhist sculptures from Taxila, Begram, Bamiyan, Swat valley etc.

During the Kushana period Jewelry, sculpture, textile making, leather products, metal working etc. were the main handicrafts that assimilated foreign influences and used them in accordance with the Indian setting. The Gupta age saw rapid advancement in the field of handicrafts and art forms. The murals at Ajanta and Ellora bear testimony to it.

The Medieval period the handicraftsmen flourished in the field of pottery, weaving, wood carving, metal working, jewelry etc. The contribution of the Cholas and the Vijaynagar Empire in the field of bronze sculpture, silk weaving, jewelry, temple carving is simply unparalleled. The Mughal period was the golden period in the history of Indian art, craft and culture. The Mughals brought with them a rich heritage. The Mughals introduced methods like inlay work, glass engraving, carpet weaving, brocades, enameling etc.
at March 09, 2018