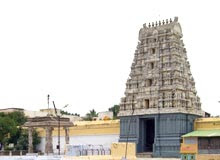 Kamakshi Amman Temple is an ancient shrine dedicated to Goddess Kamakshi. Located at Kanchipuram, the temple is easily accessible by regular buses and private taxis that are available throughout the state of Tamil Nadu. Former capital of the Pallavas, Kanchipuram lies at a distance of 75 kms from Chennai. Kamakshi Amman Temple is considered as one of the sacred abodes of Goddess Parvati, other being Meenakshi at Madurai, Akilandeswari at Thiruvanaikaval and Vishalakshi at Varanasi.

Goddess Kamakshi is regarded as one of the incarnations of Goddess Parvati. As per the Hindu legend, Kamakshi made a Shivalingam out of the sand and offered worship to it. In return, she got Lord Shiva as her husband. In the sanctum sanctorum, Goddess Kamakshi is depicted in a seated posture, which is also referred as Parabhrama Swarupini. A Sri Chakram has been placed just before the image and due worship is offered to it. The ancient shrine of Kamakshi Amman is always associated with Adi Shankaracharya, the great saint of India.

It is regarded that Goddess Kamakshi was initially an Ugra Swaroopini (Ruthless form of Shakti). Adi Shankaracharya placed a 'Chakra' before her and the goddess got personified as Shanta Swaroopini (Kind form of Shakti). The area is believed to comprise temples that have ruthless aspect of the Goddess, though Kamakshi Temple is an exception. Representing this, the image of the deity is taken out in procession at the time of festivals. It is said that the Goddess takes leave from Shankaracharya, at his shrine in the inner prakaram.

Architecture
Sprawled in an area of 5 acres, the temple complex has one spire. The 'shikhar' (spire) housing the deity is covered wholly in gold. The spectacular view of the golden spire can be taken from the outer part. In order to enter the main shrine, four entrances have been made on all the four sides. The structural layout of the temple is quite elaborated.

In the outer prakaram or part, there is a tank and numerous mandapams or halls like the 100 pillared hall, the dwajaarohana mandapam etc. Near the temple tank, various images of Lord Vishnu like Ninraan, Irundaan and Kidandaan are traceable. In the vicinity of the sanctum, there are several shrines dedicated to Ardhanareeswarar, Soundaryalakshmi, Kallar (who has been mentioned in the hymns of Tirumangaialwar) and Varaahi.

Festivals
Every day is a day of festivity at Kamakshi Amman Temple. The daily rituals include four worship services. However, the month of 'Maasi' offers an annual festival of the temple. On the 7th day of this month, processions are taken out in a silver chariot. Festivals like Navratri, Aadi, Aippasi Pooram, Sankara Jayanthi and Vasanta Utsavam in Vaikasi are also celebrated with full fervor. Like other temples of Tamil Nadu, the Fridays falling in the month of 'Adi' and 'Thai' are observed with grand ceremonies.
at March 06, 2018