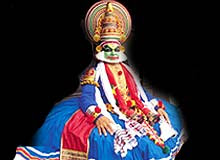 Kathakali is the classical dance form of Kerala. The word Kathakali literally means "Story-Play". Kathakali is known for its heavy, elaborate makeup and costumes. In fact, the colorful and fascinating costumes of Kathakali have become the most recognized icon of Kerala. Kathakali is considered as one of the most magnificent theatres of imagination and creativity. Kathakali dance presents themes derived from the Ramayana, the Mahabharata and other Hindu epics, mythologies and legends.

The dance aspect of Kathakali consists of pure dance (nritya) as well as mime (abhinaya). Initially Kathakali was thought to be the sole domain of men but now women also perform the dance. Like all other dance forms Kathakali has also undergone changes over the time. In Kathakali emphasis is given more on aharya abhinaya, the use of costumes, ornaments and facial make-up. It is interesting to note that Kathakali is the only Indian dance form in which the entire body, both skeleton and muscles, down to even the smallest facial muscle are used to portray emotion. When Kathakali dance is being performed the text of the drama or the story is sung for the dancer and is the baseline for his/her interpretation.

In Kerala and some other south Indian states Kathakali performance is a major social event, which starts at dusk and continues all through the night. The Kathakali tradition dates back to the 17th century. It was Mahakavi Vallathol Narayan Menon, who gave Kathakali its present form. He was the founder of the Kerala Kala Mandalam.

Kathakali Costumes The most distinctive characteristic of Kathakali is its dance costume. In Kathakali the makeup is very intricate and the costumes are very large and heavy. There are several kinds of Kathakali costumes namely, Sathwika (the hero), Kathi (the villain), Minukku (females), and Thatti. Each character in Kathakali dance is immediately recognizable by characteristic makeup and costume. The Kathakali makeup is so heavy that it looks like a mask.
at March 06, 2018