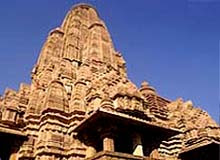 The Chandela Rajputs constructed the Khajuraho temples between 950 and 1050 A.D. The name Khajuraho comes from the Khajur tree (the date palm tree) which is found in abundance in the area. These temples are considered the "high point" of Indian architectural genius in the medieval period. Khajuraho was the capital city of the Chandela rulers. It was the Chandela rulers who built these wonderful temples, known all over the world for their passionate sculptures.

Each temple at Khajuraho stands on a high platform with a distinctive upward direction to their structure. This is further enhanced by numerous upright projections to create the effect of an overall lightness. The three main compartments In the Khajuraho temples are the "Ardhamandapa" (entrance), the "Mandapa" (assembly hall) and the "Garbha griha" (sanctum sanctorum). The Khajuraho Temples are divided into 3 groups, Western, Eastern and Southern.

The Western group of temples lies in the center of green meadow and kaleidoscopic flowerbeds. This group of temples is included in World Heritage site and showcases one of the most remarkable sculptures of Khajuraho. The most notable among these temples are the Jagadambi temple, the Kandariya Mahadeva temple and the Chitragupta temple. The temple of Lord Vishnu built by Yasovarman is also known an important temple.

Near the Khajuraho village you will find the Eastern group of temples, which include temples like Brahma, Vamana and Javari located near the Khajuraho Sagar and many Jain pilgrims visit the Ghantai, Adinath and Parsvanath situated little further.