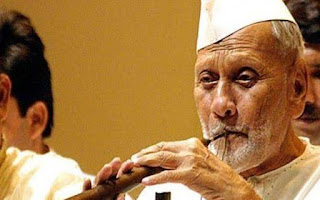 Bharat Ratna Ustad Bismillah Khan was born as Qamaruddin Khan on 21st march, 1916 in a traditional Muslim family of musicians in Bhirung Raut Ki Gali, Dumraon - in present-day Bihar. He was the second son of Paigambar Baksh Khan and Mitthan. His grandfather Rasool Baksh Khan exclaimed "Bismillah" at his birth and Qamaruddin Khan came to be known as Bismillah Khan.

Born to a family of musicians, he was trained by his uncle, the late Ali Baksh 'Vilayatu', who was also a shehnai player and attached to Varanasi's Vishwanath Temple. His father was a court musician employed in the Dumrao palace by the Raja of Bhojpur. His great grandfather Ustad Salar Hussain Khan and grandfather Rasool Baksh Khan were also musicians in the Dumrao palace.
One of the finest musicians in the world, Ustad Bismillah Khan played to audiences across the globe. Such was his devotion to his art and music that he referred to his shehnai as "begum" after the death of his wife.

The maestro was awarded India's highest civilian honour, the Bharat Ratna, in 2001.