letter from anna hazare to media

‘Truth Must Prevail’ about Annaji’s Letter regarding “Restructuring the Core Committee”(Complete Story) !

Posted on November 5, 2011
Mumbai
5th November 2011
My Dear Sisters and Brothers,
Namaskar.
Yesterday in Press Conference at Maharashtra Sadan Delhi, Respected Annaji Hazare publicly declared that he never ever spoke to me or met me on the issue of re-structuring of Core Committee and forming a new Pan- Indian organization with ‘immediate effect’. Annaji added that I am speaking of my own mind. One Hindi Channels senior journalist called me an agent of Central Minister. Everybody in media present there at Annaji’s Press-Conference laughed at me. Actually as I was saying again and again Annaji was fed up with the core team and especially these four members (though he won’t say this in public as he is decent enough ) wanted to re-structure core team and build Pan-Indian organization. But this letter (scanned copy) is hand-written by Anna Hazare and signed by Annaji Hazare on 23rd of October 2011 at 2:30 pm when he made up his mind to get away from Kejriwal, Bedi and Prashant Bhushan and their pawns in Core Committee. Attached is its English translation too. Annaji himself spontaneously wrote this blog. Sureshbhau Pathare was present there. He tried to stop Annaji but Annaji was unstoppable. Then Sureshbhau requested me not to upload Annaji’s this particular blog on his blog at least immediately. Then from 24th to 30th how things happened chronologically, how Kejriwal, Bedi and Prashant Bhushan manipulated Kumar Vishwas letter, how I spoke to channel about Annaji’s plan, how Kejriwal, Bedi and Prashant Bhushan suppressed Annaji’s wisdom in front of on 30th October at Ralegan Siddhi and then after this Team Anna left, Annaji asked me to stay back and in one-to-one close door meeting he signed an order to hold Core Team and asked me to put on blog which I haven’t uploaded that order yet (I will reveal every proof and happenings in support of my statement). How ‘Kejriwal, Prashant Bhushan and Ms. Bedi were so undemocratic, fascist and disrespect Annaji’s thought and thrust their so-called Core Committee meeting on Annaji and overpowered me when I fought back for Annaji because Annaji is fragile, his Blood Pressure is fluctuating and is unwell. Dr. Dharmadhikari was present there. He told me to take care of Annaji as he is weak. Dr. Dharmadhikari suggested me that Annaji should be kept happy. So to avoid stress and strain I kept aside Annaji’s document.
After 23rd what happened and above mentioned all the documents and disrespect for Anna’s will, all pages and proofs and logic which describe and illustrates opportunist mind of Kejriwal, Prashant Bhushan and Bedi. I will reveal one by one the above documents and take Press Conference in Delhi at the same place where Kejriwal and company arranged Annaji’s Press Conference and through Annaji challenged my integrity and honesty.
I am not happy writing this letter to all of my country men but analogy of 3 or 4 representing 120 Crores Indians with non-transparency and undemocratic behavior is itself a paradox when Annaji is fighting against neo-feudalism, monarchy and democratic rights of every Indian. 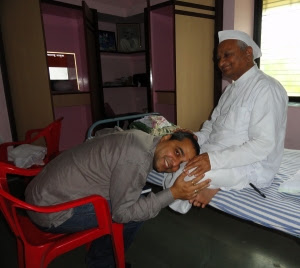 I appeal to the youth and people of this country that Annaji is very precious to us so he should be protected from evil forces. My great amount of love and regards to Annaji and I salute his consistent fight of 30 years. The nation wants his leadership for many years to come. Pan -Indian apolitical organization and youths like Bhagat Singh, Rajguru and Sukhdev and not like (Kejriwal, Prashant Bhushan and Bedi) will have to fight this battle of anti-corruption for Annaji without taking in to consideration a self-proclaimed 25 members (undemocratically and unconstitutionally) on the streets of India.
Inquilab Zindabad! Jai Hind!
Raju ParulekarWriter, Political Analyst, Media Person and Anna Hazare’s Blogger
raju.parulekar@gmail.com
(P.S:A senior journalist who defamed me live on channel should apologize for threatening indirectly that If I took a Press-Conference to put my side of story the anger of Indian people will swallow me. He challenged my honesty and integrity which I had kept intact in my 17 years of my life in Media. I have done this work for my country out of love and passion for my country, Annaji and the cause. I haven’t expected anything from anyone and instead spent my human, material and cerebral resources in this work. I believe in Indian people’s wisdom and not one media person’s ‘baseless arrogance of inferiority towards me.’ I will wait and watch.)
Please find below respected Annaji’s letter in his own handwriting with his own signature along with the date for the blog for “Restructuring the Core Committee”  written by him on 23-10-2011 at RaleganSiddhi. (scanned Copy as it is)
Page 1 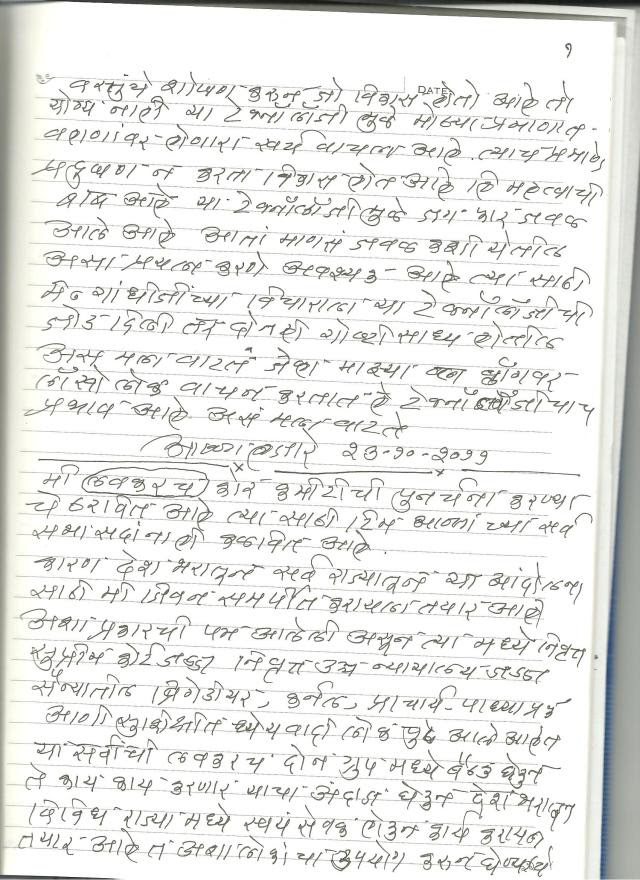 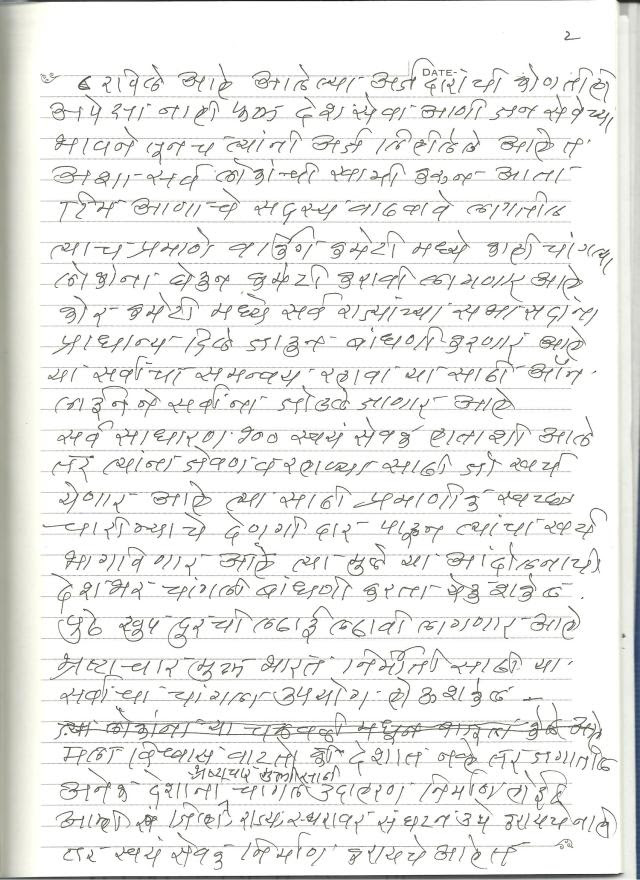 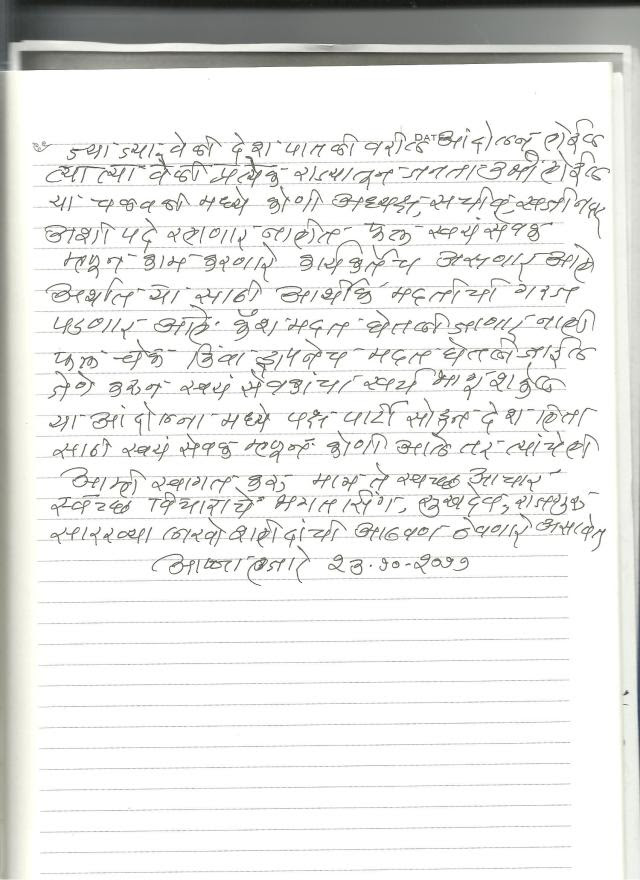 ‘English Translation’ of Annaji’s above handwritten letter  for the blog regarding “Restructuring of the Core Committee” written by Annaji on 23-10-2011…
Very soon, I am thinking on the lines of restructuring the Core Committee. I am hereby informing all the members of Team Anna. The reason being I have received letters from all over the country and states in favor of this agitation saying, ‘I am ready to pledge my life for this noble cause.’ The letters are written by retired Supreme Court Judges, retired High Court Judges, Brigadiers and Colonels from Army, Professors and Principals and educated people with idealism. Soon, these people will be categorized taking in to consideration the type of work they are willing to do. I have decided to put to use such people from all over the country and states who are willing to do voluntary service to the society.
The applicants have no expectations whatsoever and have applied with the aim of serving the nation and the society at large. Now we need to ensure these people and expand the members of Team Anna. Also we need to have able people and form a working committee. All members from every state will be given preference when forming a Core Committee. For effective communication they will be linked on-line.
The expenses of food and shelter for say 100 volunteers will be fulfilled by donations from people having clean character. It will enable us to build an effective agitation throughout the country. We have a long battle to fight ahead. In order to have a corruption-free India we can put all this to use.The people who have been alienated from this agitation…. I believe that not only India but for other countries too this will serve as a good example to rid their country off corruption. We do not want to form organizations but create volunteers on District and State level.
When there is an agitation happening at national level you will see people rising for the occasion from every state. In this struggle there won’t be a President, a Secretary or a treasurer. People will only work in the capacity of volunteers. Naturally we will need financial aid. No cash will be accepted. Donations in form of cheque or draft are welcome. But it should come from people having belief in lakhs of martyrs like Bhagat Singh, Rajguru and Sukhdev.
K.B Hazare
23.10.2011
at March 10, 2018