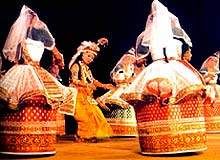 Manipuri Dance is a common name and envelopes all the dance-forms of Manipur. Thus, Manipuri dance can be called a basket of various dances. According to legends the original creator of Manipuri dance was Radha and Krishna. This Rasa Leela dance is said to be repeated by Shiva and his consort, Goddess Uma in Lasya style (in Manipur). It is interesting to note that the same dance (Rasa-dance) was performed for the third time by two mortal human beings, princess Toibi and Khamba of Manipur. The dance performed by these two lovers is known as Lai Haraoba.

The most important facet of Manipuri culture is that it has preserved the ancient ritual based dances and folk dances along with the later developed classical Manipuri dance style. Of all the classical categories, the 'Ras Leela' (a greatly evolved dance drama, choreographed on 'Vaishnavite Padavalis') is the utmost expression of artistic genius, devotion and excellence of the Manipuri people.
at March 06, 2018