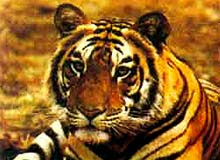 Tiger (Panthera Tigris, Linnaeus) is the national animal of India. Tiger is also called the lord of Jungles. As the national animal of India, tiger symbolizes India's wildlife wealth. The rare combination of grace, strength, agility and enormous power has earned the tiger great respect and high esteem. India is home to nearly half of the total population of tigers. The government of India launched the Project Tiger in 1973 to protect the royal animal.

Out of the eight races of the tiger, the Indian race, the Royal Bengal Tiger is found almost all over country (with the exception of the north-western region). With the launch of Project tiger in 1973, the tiger population showed a gradual increase and the census of 1993 puts the tiger population of the country at 3,750. Under Project tiger 23 tiger reserves have been established throughout the country, covering an area of 33,406 sq. km. Unfortunately due to negligence of authorities and poaching the tiger population of India is decreasing at an alarming rate. In fact, some of the tiger reserves do not have any tigers at all.
at March 07, 2018