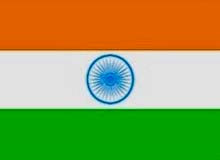 The national flag of India is tricolor. It has deep saffron color strip at the top, white in the middle and dark green at the bottom in equal proportions. The width and length ratio of the National flag is two is to three. In the centre of the white strip, there is a wheel in navy blue color to indicate the Dharma Chakra, the wheel of law in the Sarnath Lion Capital. The diameter of the wheel approximates to the width of the white strip and has 24 spokes. The design of the national flag was adopted by the Constituent Assembly of India on 22nd July, 1947. The use and display of the National flag of India are regulated by a flag Code.
at March 07, 2018