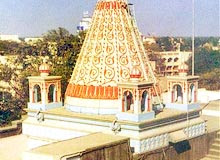 Sai Baba Temple is a holy shrine that is attracting millions of devotees from many years. Located at Shirdi in Maharashtra, Sai Baba Mandir is easily accessible from anywhere in India. Shirdi is a small town in the state of Maharashtra. The nearest railway station to this temple is sited at Manmad. From Manmad, regular services of buses and Taxis are available for Shirdi. The nearest airport to Shirdi is positioned at Nasik. The city of Nasik lies at a distance of 90 kms from Shirdi and one can hire taxis to reach Shirdi.

The mystic Sai arrived at Shirdi in his childhood. Nobody knew his origin or his purpose of visit. The legend remained at Shirdi till his last breath and made a kind of bondage with the place. Sai Baba came on this earth with a mission to spread love and happiness amongst the people. He never made any differences with people regarding their caste, color, creed or religion. He left this corporeal world in late 1920's. Sai Baba is commemorated in the form of his shrine at Shirdi.

Sai Baba Temple is open to the people from all religions, castes and creeds. The main shrine is known the Samadhi Temple. Here, the mortal body of Sai Baba was actually buried and later, a 'Samadhi' was built on the spot. Besides the Samadhi, there is a marble image of Sai Baba in a sitting position. This beautiful image cannot be described in words. It appears, as if, Sai is sitting alive and would utter a word at this instant. This image was sculpted by Sri Talini, a well-known sculptor from Mumbai.

In 1954, the temple got the idol of Sai Baba and the image is visible from the main entrance of the hall. In order to get the close glimpse of Sai Baba, one has to cross the hall, where pictures and photos of Sai and his devotees are installed. On the left side of this hall, there is room where several objects are displayed that used to be the part of Sai Baba's routine. Apart from this main shrine, there are numerous places that are recognized with the life of Sai Baba.

One such place is 'Dwarkamayee Masjid' and this place was really adorable to Sai. He used to sit here all day, on a big stone that is conserved till date. Here, a portrait of Sai Baba adorns the site and this portrait was painted during the lifetime of the great soul. Just before the portrait, the holy dhuni can be found burning. This was started by Sai himself and ever since, the fire is set alive. From this dhuni, vibhuti (sacred ash) is taken out and distributed as 'prasad' of the Lord.

The vibhuti is said to possess the healing powers and people take this to their homes. This place also possess a chakki (grinding stone), a bathing stone, a wooden pillar, chulha (stove), padukas (slippers) and a plant of Tulsi. These things were part of Sai's daily life. Today, these articles are in the same position, as they were positioned by Sai.

Another place to visit is Chavadi, where Sai used to take rest every alternate night. Besides Chavadi, 'Gurusthan' is one more place where Sai used to sit under a Neem (margosa) tree. As a matter of fact, the leaves of this tree are sweet and it is believed that with the divinity of Baba, they have lost their bitterness.

Besides all these places, Lendi Nall and Nandadeep are two other destinations that have marks of the holy man. The big temple complex comprises all these places and numerous gardens in it. The divine aura of Sai Baba is enchanting and it attracts millions of people every year. One, who comes to this temple for once, gets a celestial contentment that lasts for the entire life.
at March 06, 2018