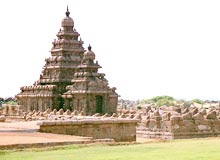 Shore Temple is a standing testimonial to the regal heritage of India. Located at Mahabalipuram, Shore Temples can easily be reached by taking regular buses or by hiring taxis from anywhere in Tamil Nadu. The nearest airport is located at Chennai that lies at a distance of 60 kms from Mahabalipuram. One of the most photographed monuments in India, Shore Temple is a structural monument on the shores of Bay of Bengal.

Built in the 7th century, Shore Temple depicts the royal taste of Pallava dynasty. During the reign of Rajasimha, the temple saw its construction when Pallava art was at its apex. Ravaged by wind and sea, the temple has witnessed the historical events of India. This work of genius was recognized and listed amongst the World Heritage Sites by UNESCO.

Shore Temple comprises three shrines, where the prominent ones are dedicated to Lord Shiva and Lord Vishnu. In the garbhagriha (sanctum sanctorum), an image of Shivalinga embraces the site. At the rear end, one can find two shrines facing each other. Here, one shrine is dedicated to Ksatriyasimnesvara and other to Lord Vishnu. In the shrine, Lord Vishnu is imaged reclining on the 'Seshanag', which is a symbol of consciousness in Hinduism.

The exterior wall of the shrine to Lord Vishnu and the internal side of the boundary wall are elaborately carved and sculptured. The images on the sculpted panels depict scenes from everyday life. However, the sculptures are incredibly real and artistic. The exterior walls of the temple are segregated by plasters into bays, where the lower part has been impressed into a series of nurturing lions. The archeological department has excavated certain other figures from the site.

Shore Temple is no more a living temple. The structure of the temple makes one to contemplate and perhaps, it was erected basically as a work of art. The Pallavas were known to be the great patrons of art and were keen to create their own style of temple architecture. In the present day, Shore Temple makes the background of Mahabalipuram Dance Festival that is held in Jan /Feb every year. The festival was organized to promote the traditional dance as well as tourism in Mahabalipuram.

Architecture
Shore Temple is also acknowledged for being the first stone structure made by Pallavas. Before this, the monuments used to be carved out of the rocks or stones. Unlike other monuments of the region, Shore Temple is a five-storied rock-cut structural temple more willingly than monolithical. In southern India, this is one amongst the earliest and most important structural temples. The spire is extensively decorated with carvings and sculptures. In the recent years, a stone wall has been constructed to protect the shrine from further sea-erosion.

Perched on a 50 feet square plinth, the pyramidal structure raises to the extent of 60 feet. Presenting a typical specimen of Dravidian temple architecture, Shore Temple generates an exclusive combination of history and natural splendor. The temple was designed to grasp the first rays of the rising sun and to spotlight the waters after sunset. In the words of Percy Brown, Shore Temple served as "a landmark by day and a beacon by night".
at March 06, 2018