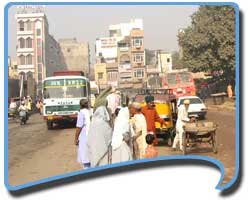 Situated in the northwestern part of India in the State of Punjab, 51 km east of Lahore, Pakistan, the city of Amritsar is globally famous for the Golden Temple and the unfortunate Jallianwala Bagh tragedy. One of the loveliest tourist destinations in India, Amritsar was discovered in 1574 by Guru Ram Das. The several Gurudwaras in this city are some of the greatest attractions for tourists.

On your tour to India you will enjoy your visit to the city of Amritsar as it offers a distinct character in areas of culture and ethnicity. The various tourist attractions in Amritsar are discussed as follows:

Golden Temple:
Constructed by Guru Ram Das during 14th century, the Golden Temple, also known as Sri Harmandir Sahib, is considered as one of the most hallowed sites of Sikh religion. Exuding both Hindu and Muslim styles of architecture, it flaunts a huge dome made of pure gold. Its architectural genius attracts the interest of one and all around the globe. Although primarily a sacred pilgrimage spot for the Sikhs, it is also visited by travelers from various parts of the world. This temple arranges for Bundara (Lunch/Dinner) through out the year for the visitors. The Jalianwala Bagh is a memorial of the martyrs of the 1919 massacre by the British General Dyer. The Durgiana Mandir is a beautiful temple dedicated to Goddess Durga. The Baba Atal Rai Tower, just a few kilometers from the main town, is believed to be the spot where Guru Har Gobind died. Wagah (28 km) is on the Indo-Pakistan border where tourists throng to see the change of guards ceremony by the border security forces of both the countries
Jallianwala Bagh -
Located near the Golden Temple, it is a witness of the tragedy called Jallianwala Bagh Massacre. General Dyer opened fire at the venue where thousands of Punjabis gathered from nearby places to celebrate the festival of Baisakhi Day, on 13 April 1919.

Wagah Border -
About 28 kms from Amritsar, the Wagah Border is an army outpost on India and Pakistan border between the cities of Amritsar and Lahore.

Ram Tirath Temple –
Situated on the Amritsar-Chogawan road, where Valmiki Maharaj is supposed to have composed Ramayana, it is another of the tourist attractions in Amritsar.

Tarn Taran –
At about 25 kms to the south of Amritsar is situated the Tarn Taran – a lake which bears holy as well as medical associations attached to it. Built by Ranjit Singh, it has fairs being celebrated on every ‘Amavas’ night. The water of the tank is said to have healing effect for skin diseases.
at March 03, 2018