The Union territories of Daman and Diu became part of India in 1961, after more than 450 years under Portuguese rule. These two places are yet to become popular tourist destinations in the league of Goa, but they offer a splendid opportunity to enjoy the Arabian sea with relative ease. The beaches, old Portuguese forts and churches are the main attractions of both Daman and Diu. Tourism in India can be further enriched if lesser known places like Daman and Diu are made popular through increase in facilities and efficient promotion by the tourism department. 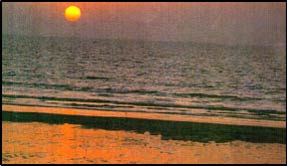 The rocky and sandy interior reaches a maximum altitude of 29 m above sea level, and palms and coconut trees abound on this island.

There are several places of tourist attractions in Daman and Diu that are worth visiting.

In Daman, one can visit the Fort of St. Jerome at Nani Daman, where there is a Jain temple as well. The 17th-century-old Se Cathedral and the Church of Our Lady of Rosary in Moti Daman are also worth a visit, and one can see the exquisite Portuguese carvings on the walls of these churches.


Daman
Daman is surrounded by the Valsad district of Gujarat and opens out to the Arabian sea to the west. The district includes the twin cities of Moti Daman and Nani Daman and is popular among the residents of Gujarat and Maharashtra as a quick weekend getaway. The unspoiled beaches of Daman are its main attraction. Tourists can enjoy the laid back evenings besides the beaches, accompanied by delicious sea food served at the numerous restaurants. The restaurants are also venues for live band performances that set the tone for a perfect weekend after a grueling week. There are many Portuguese buildings and beautiful churches all over Daman, and the place is gradually becoming popular among the foreign tourists as well.

Tourist Spots
Fort St Jerome and Jain temple at Nani Daman , the 17th-century-old Se Cathedral and the Church of Our Lady of Rosary in Moti Daman are a few of the places to visit in Daman. The churches are a major attraction of tourism in Daman, with their exquisite architecture and interiors. There is a 1000 feet high hill resort near Daman called Saputara which literally means abode of serpents.

Vapi is the nearest railway station, 7 kilometers away. Mumbai is a 1.5 hours drive , at 160 kilometers from Daman. 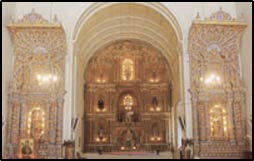 Diu
Diu is an isolated island on the Arabian coast made up of tidal marsh, salt pans, limestone cliffs, rocky coves and sandy beaches. The island is full of quarries built by the Portuguese, and covered by coconut and palm trees. The town of Diu is located at the eastern end of the island and has some interesting tourist spots including the old fortress and the Portuguese cathedral. The Nagoa beach and the museum are also major places to visit in Diu.

The local fishermen mark the Nariyal poornima as the beginning of the fishing season after monsoon. The occasion is highlighted by boat races and swimming contests.

The Diu airport connects Diu with Mumbai and some other places in west India.