Situated on the banks of the holy River Ganges, Varanasi in Uttar Pradesh is one of the world’s oldest living cities. A major cultural and religious centre in northern India, Varanasi is steeped in tradition and mythological legacy and is a much revered pilgrimage destination for not only Hindus, but Buddhists and Jains as well. Before planning any tour to Varanasi, you must be well equipped with all relevant information about Reaching Varanasi.

An important center for spiritualism, mysticism, Hinduism and Indian philosophy, Varanasi is also known as Benares and Kashi. The main attractions of this temple town are the numerous Hindu temples, ashrams and ghats, Buddhist Stupas and Jain temples.

Varanasi flaunts a well-developed transport network which connects the city to all major cities and states in India by air, rail and road. 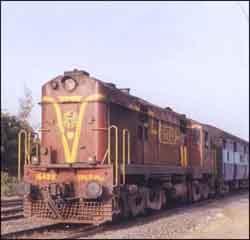 Reaching Varanasi by air is very convenient because Varanasi is well connected by air to major Indian cities. Daily domestic flights ply between Varanasi and several other cities in India. Besides the state-owned Indian Airlines, there are many private operators that operate regular air services from Varanasi to various cities in the rest of India. The daily flights serving Delhi-Agra-Khajuraho-Varanasi route provide regular air access to Varanasi.
By Rail
Being located in the heartland of the North Indian plains, Varanasi is well connected by rail to major Indian cities like Delhi, Kolkata, Mumbai to name a few. The Kashi Junctions and Varanasi Junction (also known as Varanasi Cantonment) railway stations in Varanasi flaunt excellent rail connectivity. Reaching Varanasi by rail can be a lot easier if you board the Rajdhani Express from Delhi or from Kolkata that passes through Varanasi. Regular trains are also available from Mughalsarai, just 10 kms south of Varanasi.
By Road
Positioned on the flat Gangetic plains, Varanasi is very well connected by a network of roads and road transport to all the major towns of Uttar Pradesh and surrounding areas. Regular public and private buses ply in the city.
at March 03, 2018