Chennai- The Gateway of South India 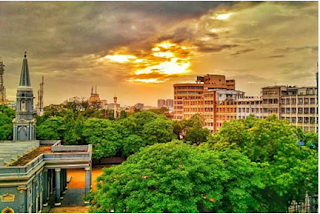 Chennai is the capital city of Tamilnadu State.  It is one of the metropolis of India and serves as the gateway of  the  culture  of South India. In spite of being the  capital  of  a  Tamil speaking  State,  it has emerged as a cosmopolitan city playing  an  important role  in  the  historical, cultural and  intellectual  development  of  India, representing  still the distinct components of the highest form  of  Dravidian civilisation.  In addition, it holds out an interesting fair of  South Indian architecture, music, dance, drama, sculpture and other arts and crafts.

Marina Beach
Marina beach in Chennai along the Bay of Bengal is India’s longest and world’s second longest beach. This predominantly sandy of nearly 12 kilometers extends from Beasant Nagar in the south to Fort St. George in the north. Chennai Marina beach was renovated by Governor Mountstuart Elphinstone Grant Duff in 1880s. All tourists traveling to Chennai never miss visiting this grand Chennai beach.Marina beach is easily accessible by buses, taxis, two and three wheelers.

Fort St. George
The Fort is a stronghold with 6 metres (20 ft) high walls that withstood a number of assaults in the 18th century. It briefly passed into the possession of the French from 1746 to 1749, but was restored to Great Britain under the Treaty of Aix-la-Chapelle, which ended the War of the Austrian Succession. Fort now serves as one of the administrative headquarters for the legislative assembly of Tamil Nadu state and it still houses a garrison of troops in transit to various locations at South India and the Andamans. The Fort Museum contains many relics of the Raj era, including portraits of many of the Governors of Madras. The fort is maintained and administered by the Archaeological Survey of India as a ticketed monument.

St Mary’s Church
This church is the oldest Anglican church in India. It was built between 1678 and 1680 on the orders of the then Agent of Madras Streynsham Master.[12] The tombstones in its graveyard are the oldest English or British tombstones in India. This ancient prayer house solemnised the marriages of Robert Clive and Governor Elihu Yale, who later became the first benefactor of Yale University in the United States.